You are here: Home / Books / Sanity found as Amazon sides with Cthulhu geeks

Can you imagine the soul destroying horror of working on a huge project, making the results available for free only then to discover that someone’s ripped off your work and has started to sell it at a profit?

Ruth (but let’s just stick with Cthulhu Chick from now on) put together a free and complete works of H.P. Lovecraft for the Nook and the Kindle.

This weekend it was discovered that the very same ebook was being sold via Amazon.com. The cover had been changed and no reference to Cthulhu Chick made. Twitter sprang to life as a host of fans and geeks rushed to spread the news and discourage anyone paying for the ripoff. Reviews started to appear on the ripoff’s Amazon page warning would be buyers of the scam.

On Monday I’ll be mailing a formal, proper DMCA to Amazon regarding the pirated book. We’ll see how they respond. This odd reverse piracy makes me feel sick, but I’m grateful that so many people have spoken up.

It looks like Amazon’s reputation remains intact on this one. The web giant noticed the fuss and reacted. It looks like the rip off has been removed although a Google cache reveals that the URL is correct and the page once lived there. 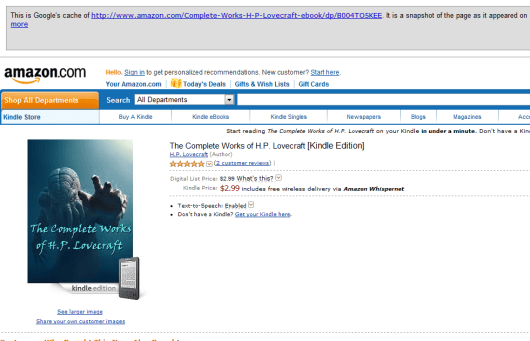 Update: Bad news folks. This “reverse pirate” is back. Hopefully this is not the end of the story.