You are here: Home / Geek Stuff / Doctor Who: Your very own flesh goo pod 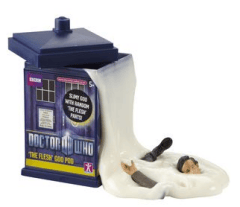 What did you make of the Doctor Who’s episodes “The Rebel Flesh” and “The Almost People”? A tricky ethical business with using flesh goo to create your own Ganger – especially if you then happen to find out that they remember what happens to them and you’ve already allowed hundreds to die.

What would you do if you had a supply of the flesh of your own? I know at least one friend who’d also go the route of making his very own Amy Pond… but that’s not what I mean!

The Doctor Who merchandise machine as rolled on and produced this Tardis shaped goo pod. It comes with its very own “parts of Doctor”. I predict party games which involve fishing around in goo and prize going to whoever finds Matt Smith’s head first!

Doctor Who: Your very own flesh goo pod

PC Dungeons and Dragons: Neverwinter trailer & H…
Cool Tech Sneaky robot controlled by Wii remote
💰 Copper Coins 💰 Geek Native is an affiliate and may earn commission on purchases you make from third-party sites.
🍪 Privacy & Cookies 🍪 The site uses cookies to survive. By accessing the site, you agree to use your browser to control cookie use or take 1d4-3 privacy damage (tracking). If you defeat cookies via ad blocking, please consider the Patreon. An intro to cookies, and how to control them, can be found here. I Manage Cookies