You are here: Home / Movies / Pirates of the Caribbean: On Stranger Tides review

Pirates of the Caribbean: On Stranger Tides is a good movie but it is not fantastic.

Johnny Depp’s favourite character, Captain Jack Sparrow, is back for another visually familiar pirate romp around the world. There are some significant changes to the movie from the last three, though, especially the last two.

Perhaps first among these changes is the absence of Orlando Bloom as Will Turner and Keira Knightley as Elizabeth Swann. Whereas both Orlando and Keira both serve as “Cwor! Sexy pirate!” factor to their respected audiences the movie is much better off without them.

In fact, with hindsight, I suspect franchise designers will admit that bringing both into the third movie – Pirates of the Caribbean: At World’s End – made little sense.

The second change is just as significant but perhaps harder to spot. There’s plenty of supernatural in Pirates of the Caribbean 4. Black Beard – played wonderfully by Ian “Lovejoy” McShane – has high functioning zombies in his crew after all.

The mistake of “At World’s End” and “Dead Man’s Chest” was to ramp this supernatural up to Sauron-esq levels where the rising of R’lyeth and pirates versus Cthulhu would seem to fit right on in there. With “On Stranger Tides” the common disbelief is back in there. At one point in the film, Jack is challenged as to whether he believes in the supernatural or not; “I’ve seen a thing or two…” he says.

The plot is pretty simple. There’s a race to the Fountain of Youth – that’s been Jack’s goal for a while now; hard to imagine he’ll give it up easily and it would be odd if he did – by the pirates (team Black Beard), the English (team Barbossa) and the Spanish (team, er, Spain).

I’m happy to put my hands up and admit the Spanish, for me, were the surprise hit of the movie – especially in the final scenes. “Take a note of that man’s bravery,” intones the level headed Spaniard. They represent the modern world that we, the audience, might relate to more clearly – especially the American audience. Richard Griffiths (Vernon Dursley from Harry Potter) as King George does a wonderful job personifying an abhorrent and out of touch class system.

One disappointment for me was Captain Barbossa – one of the few characters who, along with Jack Sparrow, have been in all four films. I’m not suggesting that Geoffrey Rush isn’t a fantastic actor, he was amazing as Lionel Logue in The King’s Speech, perfect as Barbossa in previous films and I’m sure he’ll be perfect as the voice of Tomar-Re in the forthcoming Green Lantern movie (Tomar-Re was the Green Lantern who failed to stop planet Krypton from exploding).

I’m saying that Barbossa spent the whole movie looking incredibly odd; halfway between a powdered English nobleman and a pot-face Pirate. It took right up to the final moments of the film before he could shrug off the “WTF!” that haunted him.

Two surprise hits in the movie come in the form of Sam Claflin who played the Priest and Astrid Berges-Frisbey the Spanish actress who played the Mermaid. I suspect On Stranger Tides will be a breakout movie for both. In fact, we’ll see Claflin alongside Chris Hemsworth (Thor) , Kristen Stewart (sparkly teenage vampire movie) and Charlize Theron (Prometheus, Hancock, Æon Flux) in a major role in Snow White and the Huntsman next year.

Despite their performances and the script leaning to suggest that Claflin and Berges-Frisbey are the Turner Swann replacement or the new love story, they are not. I think Penelope Cruz does a fantastic job as Angelica Malon, one time paramour of Captain Sparrow and now very competent pirate in her own right. The character is the perfect foil to Jack Sparrow and Cruz as the on-stage charisma required to be noticed in scenes when she’s toe to toe with Depp.

Why isn’t the movie better? It doesn’t help that this is the fourth in the series and that the franchise was getting a little lost. There’s more than a touch of the “so what?” about the whole film.

There isn’t really the urge to support Black Beard – who’s clearly the baddie – nor the English in the race to the Fountain. It’s all about wondering what Jack will do next in order to rescue the situation. We know Jack so well that his antics are far less surprising, therefore less engaging, than in the first movie. In fact, the best scenes in the film are actually when Jack appears to act out of character because we didn’t expect that to happen.

On a final note; the movie is “On Stranger Tides” but expect Disney theme parks around the world to run with “On Stranger Rides” instead.

Pirates of the Caribbean: On Stranger Tides review 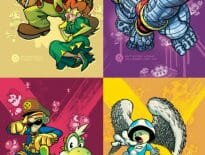