Here’s a quick The Hobbit news round-up. It’s about time we’ve found the time to mention this rather important movie here at Geek native.

First up is the news that Stephen Fry will be joining The Hobbit’s cast along with the seven foot tall Conan Stevens. Fry will be playing The Master of Laketown. Conan – who the world will soon associate as Ser Gregor Clegane from a Game of Thones – will be playing an orc caleld Azog.

Peter Jackson posted a photograph of himself next to Conan. Jackson reckons he’s about 6’5″ which is a good way to illustrate just how tall Conan Stevens actually is. He’s going to be one scary orc! 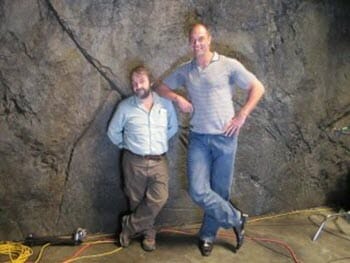 In other photographic news we have a picture, also taken by Jackson, of Gandalf the Grey. In it McKellen is wearing 3D glasses – because the film is being shot in 3D and the glasses are needed to review the footage. With a nod towards ZZ Top, McKellen rather funnily calls the picture “ZZ Gandalf” on his Flickr account. 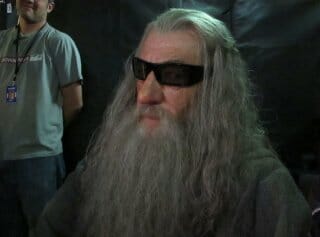 Lastly, and via McKellen’s own The Hobbit blog, comes the news that Hugo Weaving will be returning as Elrond. McKellen blogged;

“The rest of the cast remains on duty for another few weeks, working on hobbit-less sections of the film. These involve dwarves of course but also elves, with Hugo Weaving back for a stretch as Lord Elrond.”

Looks like progress and good news all around! Filming is currently on pause which allows key actors like Martin Freeman to fulfil his obligation to star as Dr Watson alongside Benedict Cumberbatch‘s Sherlock Holmes. 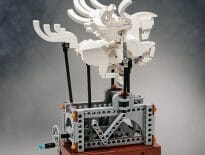