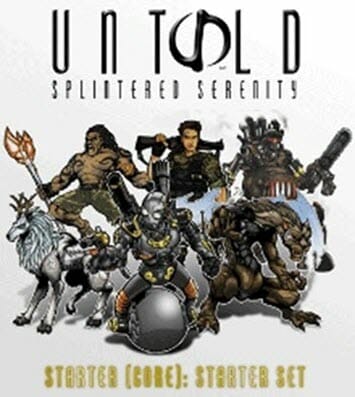 Untold is a RPG with a twist. It positions itself as a CBRPG rather than an RPG for a start. Care to take a guess to what the “CB” stands for?

Untold is a Card Based RPG. The goal is to do a way with the endless pile of sourcebooks you need to collect, read through and perhaps even shift around between gaming sessions.

Rather nicely the creators of Untold have done their research and discovered that many gamers and CCG players got frustrated at buying dozens of “blind” decks in order to hopefully end up with the card they wanted. They also discovered that players got annoyed at having hundreds of common cards build up necessarily in the purist of uncommon or rare cards. As a result booster packs for Untold contain a contents list. For example, this download pack for Iconic Character: 201132 contains 1 race card, extra aspects, a grappling hook, shoulder mounted launcher, wheel enhancement and others that are all clearly listed.

Downloads and cards. This is the small challenge I faced with Untold. As a CBRPG it’s clearly designed to a physical product. Cards are tactile. There’s even a card battling game variant of Untold (called Untold: Battle) that especially needs cards to push around. Although I’m experienced with PDF based RPGs – in many ways I prefer them to books, especially when I’m just discovering the RPG – I struggled with getting my head around how the game would play until I actually mocked up some cards.

This may well be an issue between my brain and myself but once I had bits of paper in my hand, the penny dropped and Untold’s engine began to make sense to me. In fact, the speed and flexibility of the engine – promised heavily early on the primer – began to show themselves.

Getting your hands on the Untold Primer is easy because it’s free. That’s right; the core rules are free in PDF. You can download it now and see if the game is for you. Once again, I think this is a smart move by creators Ignitus Innovation as it can only have a very positive effect on the game’s adoption.

Also, importantly, if you can’t be bothered with mucking around with PDF samplers or don’t like the idea of printing off your own cards then that’s not a problem for Untold. There is a physical version of the game. In fact, the Starter Set contains 189 cards, the primers and a d20.

Ignitus have put a system in place that lets community members suggest cards for the game too. That’s partly to reduce some of the concerns players might have with the “card based” aspect of the game but also, I think, to help build a community around it. Once the community is there and players get to see their suggestions being quickly worked into the official mechanics (ie, extra cards) of Untold then I think Ignitus Innovation will have an organic success on their hands.

Just a note about “Ignitus Innovation” before we continue – are they the people behind Untold or is this “Wandering Men Studios” who have their name mentioned throughout the rules?

Simply put, Wandering Men Studios created Untold and then rebranded themselves to Ignitus Innovation. They are one in the same. A note on their website explains the rebranding was done for legal reasons. They needed a larger company. Turns out that Ignitus’s aspirations aren’t limited to creating CBRPGs…. They even have a patent application for a new type of table in the works. I bet it is a gaming table. I admire innovation but worry about distractions.

Here’s an Ignitus innovation that’ll certainly help with any blog review of their product. The gaming studios as released a series of “quick clips” on YouTube that deep dive into one aspect of the game. If you have nightmares of pawing over wording of certain rules and mechanics and really wish you could just have the game designer explain how things should work to you then the quick clip concept is awesome.

In Untold you do away with character sheets (you’ve a deck and a die). This quick clip addresses the issue of “How do I add new cards into my Character Deck”. Ashy explains with;

By the way, doing away with the character sheet – or rather, moving aspects of the character to different cards – has a really important psychological change to the game. As you take damage, as things go wrong, you literally see your character whither a way before your eyes. The last card you’ll ever likely loose from play is your Race Card. Once that gets flipped – you’re dead.

The primer begins with a bit of a pitch for the game – not that surprising given it’s a free download and therefore something of an ad for the concept and product. Early on in the primer we’re promised that Untold will deliver on the following;

I’ve already touched on the last aspect there – “fan-based” – as Ignitus seem honestly hungry for fan created cards and other inputs. Having mucked around with my mocked up cards I’m confident the game is both fast and furious too. Watching your character whittle away in a heavy gun fight, watching as you have to move cards to your downgrade deck, in a system without any saving throws is certainly furious. Since there’s no saving throws, there is simply the use of cards, the game is fast too. There’s nothing to look up.

I think the game is flexible too. I can imagine using it different settings. There is a native setting in Untold – Splintered Serenity – is a setting in which three worlds smashed together as a result of the unknown “Event”.

There’s the magical world of Ai. On Ai magical proto-beasts known as L’na survive in a savage and wild world with dark secrets and dangerous spells. There’s the Great Machine; a world of clockwork, steampunk robots known as Klik. There’s also the post-apocalyptic Earth with two dominate human types left; both descended from a type of super-soldier. These three together certainly provide the GM with a world setting with enough flexibility.

So, is Untold any fun?

Fun depends on the skill on the GM and the attitude of the players. Despite Untold being furious and fast the authors do remind us again and again to have fun, play for the sake of playing and work on a cooperative story.

I think then, blessed with a good gaming group, Untold is fun. It’s a system that makes it easier to have fun by doing a way with the book keeping nature of so many RPGs.

Disclaimer: My copy of the electronic version of Untold was provided for the purposes of review. This isn’t a playtest review.