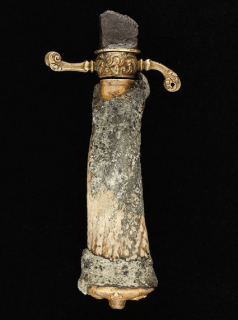 Ah, okay, Blackbeard’s actual sword may not have been a +2 magic sword. However, over at Time over 6,000 people have Facebook liked the news of the discovery and that suggests to me that Edward Teach’s sword has some power.

Edward Teach – better known as Blackbeard – was one of the first pirates to really capture the imagination. He was one of the first to fly a black flag with bones on it. His thick black hair was scary enough to give him his nickname. He also used to light fuses beneath his hat so that smoke would waft out from underneath. Imagine trying to fend off an angry pirate who seemed to be oozing smoke as he attacked.

The National Geographic has been busy trying to excavate the Queen Anne’s Revenge – Blackbeard’s flagship until it ran aground – when they came across the stash.

One of the recovered fragments is that of a sword – no ordinary sword, but an ornamental sword which would have been beyond the reach (and perhaps of no value) to anyone other than the captain.

The sword suggests a French design and that would make sense since the Queen Anne’s Revenge was originally a French merchant ship until Blackbeard fitted it up be to a pirate ship.

time to read: 1 min
Movies In the Dark: Wil Wheaton movie by Ed Brubaker
Sites Keep Anime Alive
💰 Copper Coins 💰 Geek Native is an affiliate and may earn commission on purchases you make from third-party sites.
🍪 Privacy & Cookies 🍪 The site uses cookies to survive. By accessing the site, you agree to use your browser to control cookie use or take 1d4-3 privacy damage (tracking). If you defeat cookies via ad blocking, please consider the Patreon. An intro to cookies, and how to control them, can be found here. I Manage Cookies