You are here: Home / Geek Stuff / Cosplay Trends at the SDCC Special Edition

Cosplay, like all things, has its trends – and it’s not that the people doing it are necessarily trying to fit in with the crowd.

It’s just that many people all happen to have similar interests, especially in a giant convention full of geeks.

Trends in cosplay tend to say less about just cosplayers specifically and more about what is generally popular with the majority of attendees at the convention. Here’s what is hot right now in late 2021.

Millennial nostalgia is at an all-time high and it was easy to see proof of this phenomenon throughout the convention. This Good Burger cosplay is a prime example of this longing millennials have to relive their childhood.

Similarly, this Toys R Us Geoffrey cosplay reminds everyone who grew up in the 80s and 90s of the pure, unbridled joy of going to a massive toy store where a kid really could be a kid.

There are always plenty of Spider-Man cosplayers at Comic Con, but this year there was a particularly higher proportion of Spider-Men cruising the halls than a typical year. In fact, they seem to have replaced the high number of Deadpool cosplayers at the last few conventions.

While most Spider-Men were in generic costumes, there were plenty of creative takes on the character, like this nearly naked Spider-Man in boxer briefs bearing his face.

While there were a lot of Captain America mashups, many of the cosplayers came with a partner in matching gear, like this renaissance Captain America and Captain Marvel.

The Black Friday weekend proved to be a great time to celebrate the holiday season in full Christmas gear and there were many festive cosplays as a result –like this Santa Captain America and Mrs. Claus Black Widow, a couple that was also part of the Captain America mashup trend.

While Deadpool’s popularity seems to have waned a little bit this year, he was still around here and there. And this Christmas Deadpool was a great present for everyone.

Like Deadpool, the steampunk trend has largely cooled, but it was still fun to see this elaborately adorned steampunk Santa Claus and Mrs. Claus.

Not all cosplays need to feature an established character. This mele Kalikimaka hula girl cosplay was a simply delightful way to enjoy the holiday.

Perhaps it was the cooler weather since this Comic Con was scheduled for November rather than late July, but there simply weren’t as many skimpy costumes this year, particularly in genderswapped varieties. This wonderfully executed Doctor Strange cosplay is a perfect example.

Yes, there are always plenty of Marvel characters at Comic Con, but this year, Disney Plus versions, in particular, were all the rage. A perfect example is this Loki for President, which is also a good example of a not overly sexualized genderswap costumes.

This Disney Plus version of Wanda and Vision also exemplified this trend as they posed with an eagle from the new HBO Peacekeeper show.

The Wanda is also an example of another common trend this year, which was men in genderswapped cosplays. Unfortunately, I failed to get any pictures of the many male and female Agathas running around the convention floor.

There have been countless female cosplayers dressing up like male characters at past cons, but while there have always been a handful of men dressing as female characters, there seemed to be far greater proportion of them than in previous years.

This Bride of Chucky couple’s cosplay was a prime example of both this trend and the not sexualized female genderswaps that were big this year.

Yes, there are always tons of Harley Quinn cosplays at any con and this convention was no exception, but like overly revealing genderswapped cosplays, there simply weren’t that many hyper-sexualized Harley cosplays this year like the ones with the ripped tee and short booty shorts on her Daddy’s Little Monster outfit from the first Suicide Squad movie or the red leather corset top from Arkham Asylum.

Instead, the new trend was this cool and fashionable red dress Harley wears in the new Suicide Squad movie.

Being as how Squid Game was the breakout Netflix hit of the last few months, it’s hardly surprising that the convention was filled with people in the green tracksuits and the red jumpsuits. This group was particularly entertaining because they cruised around outside all weekend with this giant doll from the show on a hoverboard. 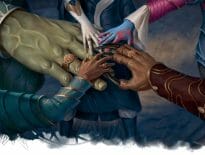 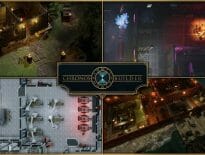