Today is a big day for sci-fi fiction and the superhero genre. Today is Wold Newton Day.

Wold Newton is a small village in the Yorkshire Wolds, in England. It has a population of about 300. Over 200 years ago, on December 13th in 1795 a meteorite crashed into the outskirts of the village. The image with this blog post is that of the monument that commemorates the event.

So, what does this have to do with sci-fi and superheroes?

Science fiction writer Philip Jose Farmer used the Wold Newton meteorite strike in the backstories of two heroes. In Tarzan Alive and Doc Savage: His Apocalyptic Life it is suggested that the meteorite strike actually unleashed a wave of radioactive energy that hit a passing coach. The genetic mutations this caused effected the descendants of the people in the coach; they’d have much higher intelligence and strength than normal and would be driven to be either exceptionally evil or good.

In effect, this was the gensis of the combined back story. Check out Wikipedia’s list of people touched by the Wold Newton event. We’ve everyone from James Bond, to Fu Manchu, The League of Extraordinary Gentleman to The Avenger, Sherlock Holmes and Count Dracula. 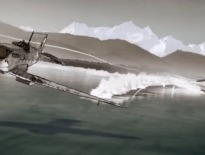