The Kinect may not appeal to everyone but a sign that it’s here to stay is how quickly so many people are doing cool things with it. These cool things are often a result of hacking.

To begin with Microsoft wasn’t that happy about the hacking. The good news is that they now say they’re excited by it. I think this is a good move by Microsoft; the hacks are an idea factory for the device. Remember; this a set of cameras and voice activation that can almost record 3D video, runs on very little power and looks like a robot head.

This demo of an interactive puppet was put together with just one day of work. It’s pretty cool and it clearly shows how far the Kinect could be used with projection control.

What do you think? Will we see games that feature projections in the near future?

Is the Kinect the first step to holographic gaming? 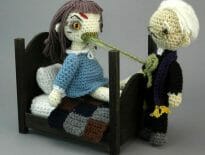