You are here: Home / Games / Console / Survive! A guide on how to do well in ARK: Survival Evolved 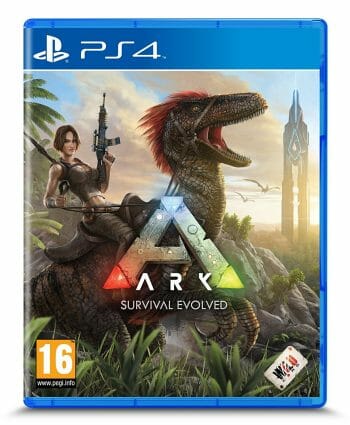 ARK: Survival Evolved is game that’s been circulating and gaining headway overtime; it’s a survival game that first appeared on PC and was later moved to consoles such as PS4, Xbox One, and inevitably, Nintendo Switch.

While yes, it’s a survival game, it’s a touch more on its own due to the game featuring prehistoric life and mechanics previously unheard of in many survival games. As a result, the game is a harder to understand than most. In the early integration of the game to PS4, the console I played on, there wasn’t a tutorial featured in the game, and players had to use trial and error to actually figure things out. And, even with the iteration we’re not now, there are still newcomers who struggle.

So, that’s where I come in to fix this. As I’ve been playing ever since the game’s launch on console, I feel I know enough about ARK to give some good tips and hints that can better players’ experience with the game, and help them to survive the ARK, either with friends or alone.

To save some time, I’ll have to assume everyone reading this already has a basic understanding of the game’s workings, and also, I’ll be including PvP tips, for those who enjoy that side of the game. 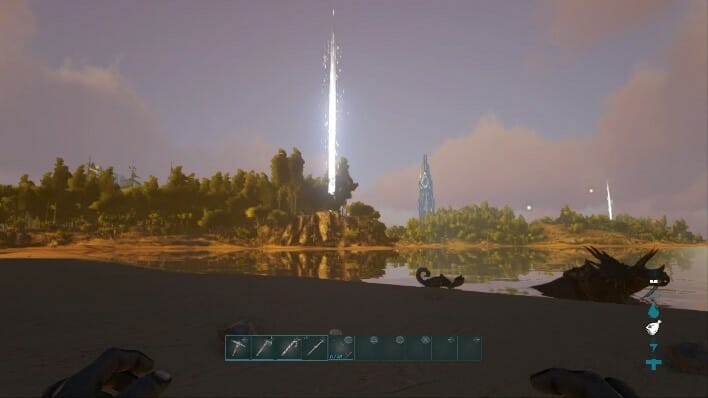 Picking a place to spawn can always be hard for players, and even then, there comes the ever-constant issue on where to set up a base? A bit of a beginner topic but, when you see many bases set up in asinine locations, I feel like this bit of help could be good for players.

For one, don’t always spawn in the South. Sometimes, pick the West. 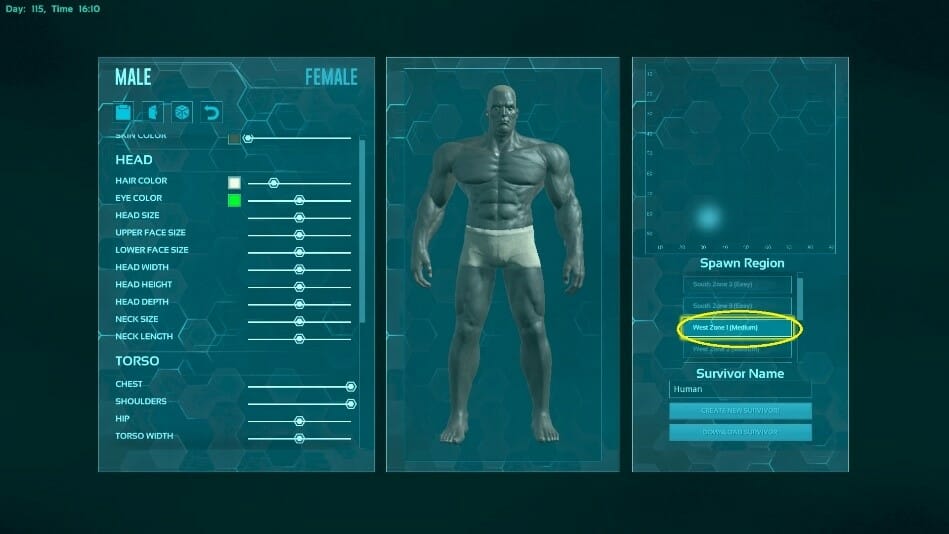 Here, players have the advantage of still having the same fauna they’d seen in the south, with the exception of a lot of players as the majority tend to stick in the south; very lucrative, from what I’ve learned in my past.

But, after one sets themselves in their spawn point, and levels up a bit, where to build? My advice? Build somewhere out of the way, where it’s cumbersome to go after you. 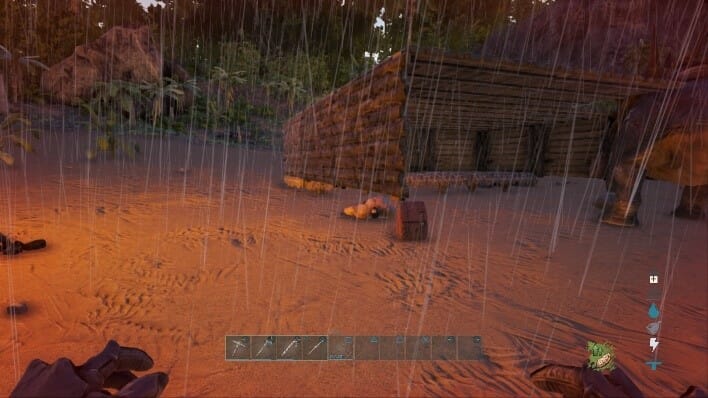 Above is an example of where not to build.

Placing bases in areas covered by rocks and other things allow for reduced visibility, and therefore, an easier time surviving in the game. Sure, a raid might happen, but by the time it does, you’ll have the means to stop such a thing. And then some.

One of the hardest things about ARK. Since it carries some RPG elements, your character will level and grow overtime, and gain access to new engrams as time goes on. Many players tend to build into health and stamina normally, and for those who desire combat, they build into Melee Damage and Movement speed to easily overwhelm enemies. However, there’s a final area that most tend to overlook that could save them. 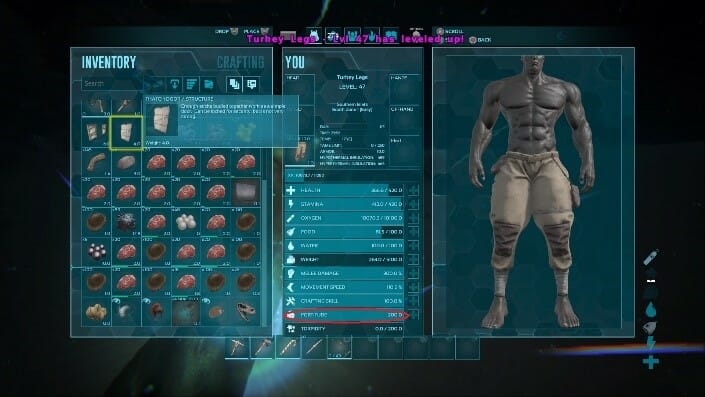 An often-overlooked ability, Fortitude is considered as Resistance; how well your character can resist things like the elements, and sickness, but more importantly, it can shake off Torpor easier.

Torpor, for those who don’t know, is the tiredness mechanic. It can be inflicted through certain weapons (clubs, tranq arrows, boomerangs) or by certain creatures (Troodons, Araneo, Titanboas) and even by using a stamina consuming action when the stamina meter is depleted, among other things. When the Torpor gauge goes past 50, the player will fall asleep and be rendered completely helpless to all attacks and pillaging. Fortitude, however, allows a player to resist the Torpor buildup, and buy time to either escape or kill the attacker and use some Stimberries to shake the effects off before they’re rendered helpless.

While armor can also automatically aid with Torpor Resistance, manually upgrading Fortitude can also help with things like illnesses and the elements, allowing players to brave harsher areas. For the Scorched Earth map, Fortitude is a good must as it allows for them to easily survive the extreme desert heat and the freezing nights early game, as players don’t unlock the Desert Gear until at least level thirty.

A long time ago, players could build their entire base as a water-based one. To make a several stories tall, water-based base that could be parked in the middle of the ocean to prevent raiding, and allow them to skirt around, raiding and looting like prehistoric pirates.

… then… the devs for the game made these. 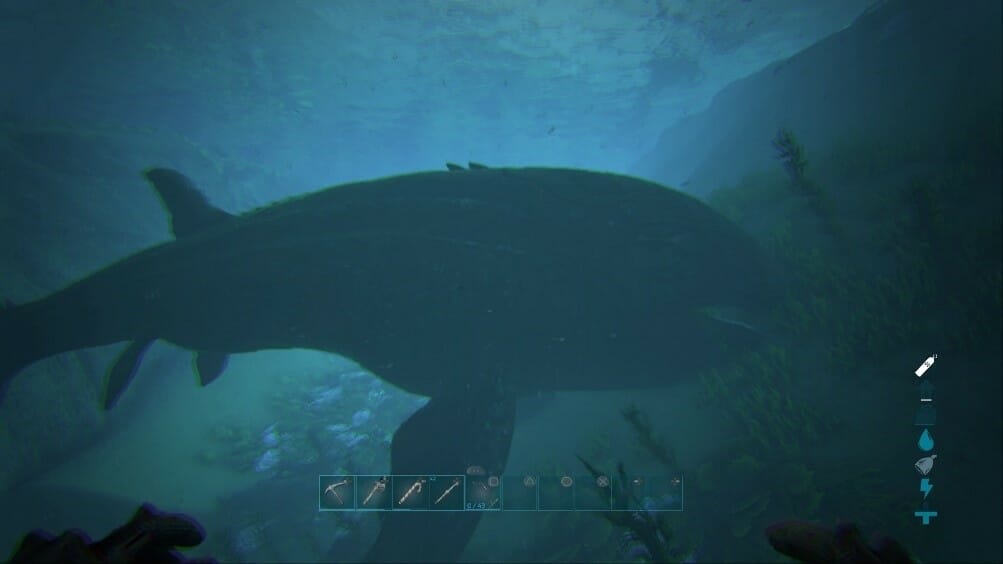 This thing? This is a Leedsichthys, or Leed for short. Normally neutral and uncaring to a player’s presence, these things despise rafts, and will automatically attack one if it’s spotted. One can do tremendous damage to a raft depending on the level, but several of these hulking fish can destroy even a metal raft base in seconds, causing all loot and goods to instantly fall to the bottom of the ocean, along with everyone inside who’s asleep. Because of these, raft bases are trickier to do now. You must dock them somewhere in shallow waters. Otherwise, a Leed can swim up and destroy it when you’re offline. So…raft bases are still possible… just significantly harder.

Something that’s for our PvP audience out there; you know who you are. While most players tend to fight from the comfort of their tames; a small minority will choose to fight on foot against foes using a myriad of tools and trades, including pikes, swords, and even guns and crossbows to steal the victory, and take their foe’s loot. However, there is a good method for dealing with this and allowing for an easy securing of loot, with little to no ramifications. 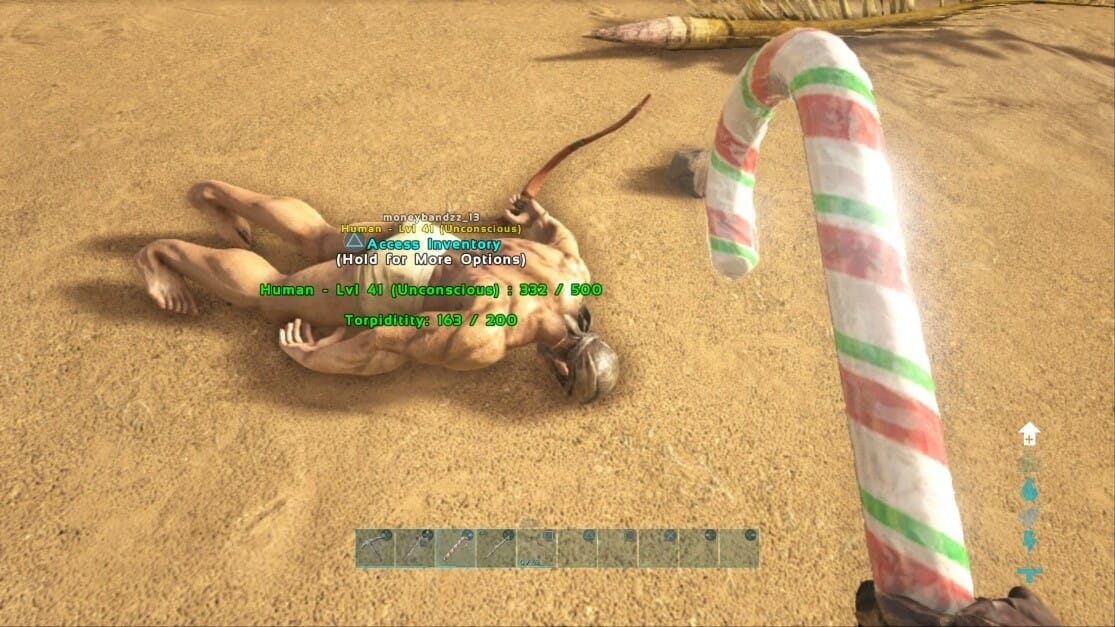 Knocking a player out renders them completely helpless, and allows for easy looting, without them knowing who you are, unless they got smart enough to identify you earlier via the use of a spyglass. This way, you can easily overpower someone, take their goods, and run off with them with the player being unable to stop you. Clubs aren’t the only way to do this, even if they are festive themed; as I wrote above: boomerangs, tranq arrows, tranq rounds, and even using a melee strike with most firearms build torpor in victims and allow for them to be easily subdued. While most complain and gripe about this, please note, these are the same players who more or less advocate raiding, but not themselves being raided.

Let their cries fall on deaf ears. Doesn’t hurt anyone.

So, as a whole, ARK is a…weird game. It’s a fun game that I do recommend for people interested in survival games, but it’s one I also recommend people go into with some focus. The game’s notorious for its spawning AI to be very idiotic, and can spawn things like Alpha predators in close proximity to new areas… the game doesn’t seem to stop this. So, as a result, be mindful when playing the game.

… and always keep your head up. You never know what you’ll find out there in the ARK.

By MKnightium
I’m an aspiring writer trying to make a name for himself in the world, and I’ve been working on various works of fiction, both for the novella and the novel sort. I’m also an avid gamer but, with school and this, that’s often not done as much as it should be. I also take care of two adorable reptiles who I do my best to provide for.

Survive! A guide on how to do well in ARK: Survival Evolved

Cool Tech Is this the perfect desk lamp for your DM?
wpDiscuz
Loading Comments...
Comment
×
💰 Copper Coins 💰 Geek Native is an affiliate and may earn commission on purchases you make from third-party sites.
🍪 Privacy & Cookies 🍪 The site uses cookies to survive. By accessing the site, you agree to use your browser to control cookie use or take 1d4-3 privacy damage (tracking). If you defeat cookies via ad blocking, please consider the Patreon. An intro to cookies, and how to control them, can be found here. I Manage Cookies