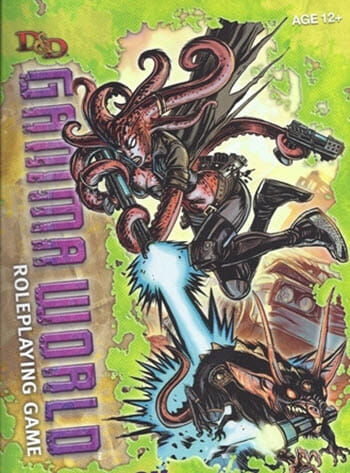 The new Gamma World is due out in the UK very soon. Wizards of the Coast are taking a gamble with it but it is an understandable gamble.

Firstly, they’re strongly connecting the D&D brand to it this time. There’s not that familiar d20 logo to act as the outstretched hand to new players this time. I suspect it’ll be Gamma World that acts “d20 Sci-Fi” for this generation of WotC RPGs.

The gamble, though, isn’t plugging the game heart and soul into the D&D brand but the Magic: The Gathering direction they’re taking with it.

This edition of Gamma World will be all about collectable cards. That’s a risk because it may well be an element many gamers don’t want in their game. It’s an understandable risk because you can clearly see how Wizards can use this to make the game more profitable for them. I’m in no way against WotC making money. It’s necessary.

I’m very much in favour of the evolution of roleplaying games. Let’s try something new. Let’s push the boundaries and not simply re-create that the greybeards got up to in the 70s. However, I can see why some GMs might worry the addition of collectable cards might be a step too far.

Some GMs already have a problem with players buying supplements for the gaming world, reading about the latest class, race, magic item or spell and then nagging until they get their way or, perhaps worse, taking in-character actions more likely to result in one of the new features popping up in game play. The fear, as I see it, is that the collectable cards give those sorts of players another way to discover and inject previously unplanned elements in to the game.

Of course, this is just speculation. I don’t know exactly how the Gamma World decks will be made and I very much doubt that players will get an entirely freehand. Wizards say this about who gets to build what;

You can play using only the starter cards that came in the game box, but a player can create a customized character by building his or her own Alpha Mutation and Omega Tech decks from booster packs. Likewise, a Game Master can also customize his or her own decks.

It is also clear how important the cards will be to the game. Check out this Gamma World Unboxing video from Michael Robles. Pay attention to how much camera time and discussion the rulebook gets and compare that to the attention and focus the cards get.

(You may have to wait a little while to buffer that video. Hasbro doesn’t quite have YouTube resources).

Wizards of the coast have also shared some insight into how the game play will work with the Gamma World cards.

A card can be in one of three states. It can be in the Draw Deck, be Readied or Discarded.

There are actually two draw decks; one for the Alpha Mutation cards and another for the Omega Tech cards. 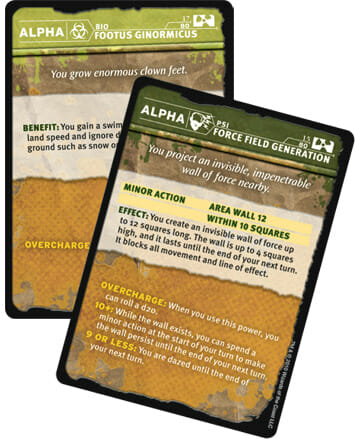 The 4th edition of D&D has made the game far more tactile. In my experience more gaming groups are making use of minis or counters in order to co-ordinate the MMORPG like combat. The D&D Gamma World RPG cards are part of that trend.

There’s quite a lot of handouts in the Gamma World box. Just to recap on the unboxing video, here’s what you get:

That’s quite a bundle. Finding room of the shelf, especially with a growing collection of boosters, may also be a challenge.

I remain open minded. Drawing cards from a deck in order to discover how your character temporarily and dramatically mutates seems awfully random to me – but if that’s the nature of life in Gamma World then so be it. It’s a high fantasy approach to a radioactive future RPG.

Have you bought it? Played it? What did you think?

Personally, I think that the trading card game logic is “whoever has the most money to spend wins”. D&D was always a bit like this, with expansion books with much better spells, classes, etc. However, this is now getting to the point where I might consider boycotting Wizards of the Coast RPG’s. It seems that in this game, the logic is “Screw the Dungeon Master, I have money. I also have to object to the lack of Character Types, like in early editions. Character Creation was somewhat random, but you could choose how far from a normal human you wanted… Read more »

Ideally, D&D was never about winning, is Gamma World any different? – but I do get your point. I know the bank balance side of the puzzle put many people off M:tG. 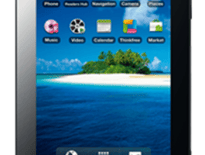