Pinnacle Entertainment’s Savage Worlds is an alternative gaming system, with its own license, to D&D 5e. Sometimes the timing just works out, as Legend of Ghost Mountain’s box set has come to Kickstarter just as some gaming groups are looking for something new.

Ghost Mountain is sacred and is where a gate to the underworld can be found. The Kickstarter campaign page for the project is where you can find out more or pledge support.

You will need a copy of Savage Worlds to play Ghost Mountain, and hardbacks have sold out for now.

In the setting, Ghost Wardens are supposed to make sure spirits can safely and peacefully go through the gate and to the afterlife.

It’s not happening; instead, the dead are rebelling and committing crimes against the living. Adventures in the Legend of Ghost Mountain RPGs are of the Ghost Wardens trying to right this wrong.

The boxed set comes with minis, Kickstarter backers get an Imperial Dragon model, and the campaign is a ten-chapter story.

The Ghost Wardens draw magical power from strong emotions. Rage. Fear. Joy. Disgust. Sorrow. Only a handful of candidates pass the harrowing trials to harness these emotions—a process that turns their hair white. Those who succeed are privy to mystical martial arts techniques. Here the styles aren’t based on the movements of animals but the feelings that drive human triumphs and tragedies.

You can support this D&D alternative by spreading the Kickstarter across your social media, emailing people or shouting loudly through a megaphone. You can also pledge some cash.

Backers who pledge $20 or more (about £17) will get the Legend of Ghost Mountain main book in PDF and the Archetype Dossiers too.

Or, $25 supporters can secure themselves that Legend of Ghost Mountain Imperial Dragon model.

Gamers who prefer print products will get that set of the main Legend of Ghost Mountain and Archetype Dossiers as books and ebooks with a pledge of $40.

However, the digital DM tier starts at $50 and adds two map packs and a poster map.

It’s $70 to get the digital edition of the full boxed set, which takes everything (except the mini) mentioned before, adding figure flats, an action deck, screen inserts and the adventure as PDFs.

The print DM tier is $100, with worldwide shipping offered, and has the physical and digital books.

The printed box set’s complete deal requires a pledge of $150 and that’s where the tiers top out. That boxed set has dice, bennies, pawns and a GM screen.

PEG estimate March for the digital rewards and October for the physical ones. 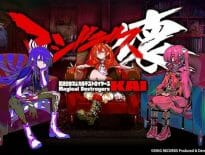 Anime They came for the geeks: Magical Girl Destroyers h…