Whelp! It’s been another week, and imagine if you could no longer stand the mention of acronyms like ‘D&D’, ‘5e’ or ‘OGL’?

Let’s dive in with the RPG news summary of summaries.

Once again, and I suspect not for the last time, this RPG news round-up has an easy-to-skip/find the first section on OGL stories.

Geek Native’s RPG Publisher Spotlight, as supported by Patreons, is all about getting some publicity on other publishers and feels proudly relevant this month. The February candidates are currently listed on the Spotlight page.

There’s been a scary amount of mainstream news, forum chatter and Discord heat about the OGL updates. There’s been too much rumour. In this section, I’m not recapping it all but sharing a wide range of stories, each with different slants and focus.

Correction: Free League haven’t released any OGL license. They’ve announced their intention to do so. Currently, their previously released OGL SRD has been removed from public access. 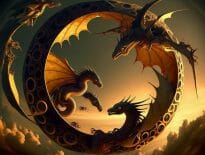