Spinning off from Fate/strange Fake is -Whispers of Dawn- and another Holy Grail War.

Aniplex first announced this last year and for New Year, but the battling anime was delayed due to production issues. Instead, we got nearly 7 minutes of footage on the 31st, with the anime now slated for summer.

It’s the first time we’ve seen a Holy Grail War fought in the States. Wizards and heroes from the past and future bound to magic-users battle for the supernatural promise.

Shun Enokido and Takahito Sakazume, who created animated trailers for the mobile game Fate/Grand Order and the novel Fate/strange Fake, will direct the film.

In a Holy Grail War, Mages (Masters) and their Heroic Spirits (Servants) fight for the control of the Holy Grail—an omnipotent wish-granting device said to fulfill any desire.

Years have passed since the end of the Fifth Holy Grail War in Japan. Now, signs portend the emergence of a new Holy Grail in the western American city of Snowfield.

Sure enough, Masters and Servants begin to gather…

A nation shrouded in secrecy…

And a city created as a battleground.

In the face of such irregularities, the Holy Grail War is twisted and driven into the depth of madness.

Let the curtain rise on a masquerade of humans and heroes, made to dance upon the stage of a false Holy Grail.

A-1 Pictures are making the show, and with Aniplex of America involved, there will be an English sub and dub release simultaneously. 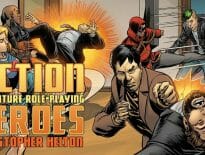