This is the new Trigun, told in a way that’s only possible because the manga has completed

We’re very much expecting the show to be based on Yashuhiro Nightow’s manga, but it’s been reported that the Roberto de Niro character will replace Milly Thompson as the main supporting character.

Yes, there’s a character Roberto de Niro, and they are a drunken reporter who, with Meryl Stryfe is out looking for a scoop on the pacifist sharpshooter.

The first episode got a world premiere at Anime NYC care of Crunchyroll, who will stream the new anime. The series starts worldwide in January.

There are English subtitles on the trailer; toggle the caption button to get them.

Beaststars storyboarder and Cavity Express director Kenji Mutou will direct the project, and Yoshitsugu Matsuoka will provide the voice of Vash the Stampede, with Junya Ikeda as Millions Knives.

The original anime is more than 20 years old, aired in 1998 for 26 episodes and followed a gunman with a 60 billion double-dollar bounty. The hordes of chasing bounty hunters are the stampede that gives Vash his nickname. 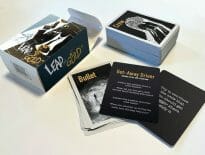