I was impressed with the first Malevolent Spirits trailer, calling it spooky.

The official promo is more action-focused but laden with shadows. The rock music holds attention while strange fights finish and characters loom.

The opening track is “Koigoromo” by the appropriately named Arcana Project, and the ending “Rebind” by True.

Malevolent Spirits: Mononogatari is due out in Japan early January. It’s being made by Bandai Namco Pictures, which may increase our chances of catching the show in the West.

There’s an English language manga for it, which Seven Seas publishes. That’s described;

When spirits cross over into the human world, they can possess old objects and gain a physical form: a tsukumogami. Tsukumogami can be gentle, violent, or somewhere in-between, so the Saenome clan peacefully helps send them back to the spirit world to avoid destruction.

Kunato Hyouma is a member of the clan, but is…less than peaceful, since he holds a grudge from when a tsukumogami robbed him of something important. Afraid that Hyouma’s brash anger in dealing with these spirits will lead to supernatural catastrophes, Hyouma’s grandfather sends him to live in Kyoto with Nagatsuki Botan, an unusual young woman who actually lives with tsukumogami like family! Can Hyouma learn to control his emotions when dealing with tsukumogami, or is his own spirit doomed to be possessed with rage forever? 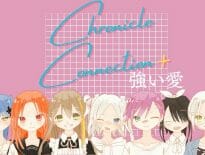 Tabletop & RPGs Chronicle Connection Plus: A solo TTRPG to practic…

Tabletop & RPGs Free League announces The Walking Dead RPG
wpDiscuzComment Author Info
Manage Cookie Consent
We use technologies like cookies to store and/or access device information. We do this to improve browsing experience and to show personalised ads. Consenting to these technologies will allow us to process data such as browsing behaviour or unique IDs on this site. Not consenting or withdrawing consent, may adversely affect certain features and functions.
Manage options Manage services Manage vendors Read more about these purposes
Preferences
{title} {title} {title}
Loading Comments...