Randall C Ellis put together tips and techniques to bring your fantasy world to life for Geek Native readers back in 2014.

A lot has happened in that time. He had just published Sojourner’s Moon, and now we’re on to version 3.

The 148-page RPG is a sci-fi/fantasy. It is available as a PDF from DriveThruRPG and a hardcover from Amazon.

Here’s how the designer introduces the tabletop game;

For those of you who are not familiar with the game let me write this: Sojourner’s Moon 3.0 is a science fiction-fantasy game based in the future aftermath of a planet’s demise, and it unfolds from the ancient travels of the Gaeans when they reach a new universe called Solipsis. When they reached Solipsis, they encountered a Species called the Dwarrow, who gifted them a planet, and found their home among the other later arriving Species.

Kindly, Randall, succumb to requests and put together a preview. That’ll make it an exclusive, right? Geek Native is running it first.

I note an alternative preview on Amazon, too.

Version three is both Player’s Guide & Journey Master’s Guide in one book. The edition adds new character personas with The Merchant and new Species. The PDF is formatted with pages as thumbnails for searching text. 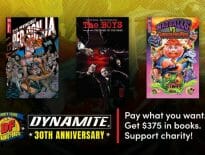 Comics 30 years of Dynamic Forces: The Boys and Vampirell… 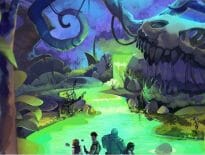