Drakar och Demoner is the original tabletop RPG from Sweden, and Free League is today’s Swedish publisher powerhouse in the tabletop space. So, the two have come together.

Dragonbane will be the English version of the re-imagined game, and with about three weeks left to run, there are nearly half-a-million USD pledged.

1982’s Dragonbane is Scandinavia’s first and largest tabletop RPG. Now, we commemorate its 40th anniversary with a new and revamped version, with one foot in the Swedish gaming legacy and the other in Free League Publishing’s current and inventive game design.

The debut 1982 version was a translation of Magic World by Chaosium, but Dragonbane soon took on its own life, developing through a dozen editions in Sweden. Under its English name, Dragonbane will be available internationally.

There’s a quickstart in Dropbox and English, with a Swedish option available.

Dragonbane has magic, intrigue, and adventure. This updated edition is designed for rapid, intense play with little setup and easy-to-run adventures.

The Kickstarter pitch positions Dragonbane as a toolbox for telling fantasy stories of many types, but one that also allows for laughter and foolishness at the table while challenging adventurers.

Free League Publishing calls this “mirth and mayhem roleplaying” – suitable for extended campaigns but also a one-shot if you simply want a night of fun. The core package will feature at least one entire adventure, and we intend to unlock many more as stretch goals, delivering a comprehensive campaign.

There’s also a GM screen, cloth map, and name in the credit to add at SEK798. A Retailer five copies deal is there at SEK998.

It’s about a year away from print, with backers being asked to wait until August 2023 for the game. 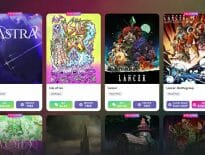