Previously, we’ve been introduced to the show as a guy who gets fired from his group of heroes for being a bit shit. He’s only a beast tamer. However, he hooks up with cat-girls as life is better.

The new trailer, without any English subs, adds some more layers.

The official website explains a bit more. Yes, maybe Rain, our beast tamer is fated to take on the demon king but it sounds like Kanade, the cat-girl, is the interesting one.

Google translate gives me this;

Rain, who chose the adventurer’s path to live freely, encountered a girl Kanade who was attacked by a monster during the exam. She risks herself to let Kanade escape, but she defeats the monster with a single blow.

Kanade was one of the “strongest species” with extraordinary power, a girl of the cat spirit tribe! Kanade, who was attracted to her talent of her rain and her kindness, tells; “Do you want to use me?”.

It’s the team-up that draws attention. Once more, digging into GTranslate, we get;

Rain makes a contract with the strongest cat girl and begins a new life as an adventurer. However, the heroes who banished Rain and another “strongest species” noticed its power .

The manga has been going since 2018 and must be doing something right. 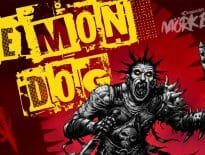