We’ve just wrapped a competition to win a copy of The Ultimate RPG Character Backstory Guide by James D’Amato.

If you missed out, sorry. You can always find the latest competition in the chat portal or you buy the book from Amazon, IndieBound or BookShop.org.

Good news! You can catch up with James here and now.

The podcast host of One Shot and RPG author kindly agreed to answer some questions. So, here goes!

Oh, fans of Patrick Rothfuss and Kingkiller… read to the end!

Why do character backstories matter?

I think the reasons vary player-to-player and based on the experience you want to have. Generally, though, I think a good backstory enhances a game. It provides motivation for your character, plot hooks for a deepening story, and justification for exciting decisions. Like seasoning on good food, it elevates everything it touches and helps the experience stay with you.

Are there any genres in which character backstories are even more important?

I hesitate to use the word “important” as it leans too close to “required.” You can certainly jump right into a gaming experience and develop your character as you play—and there is a version of that for every genre.

I think backstories enhance the experience of play in all genres. However, X-Punk in particular benefits from creating a connection between your character and the setting. Punk at its core is about resisting oppression. A good backstory clarifies what that oppression means to your character specifically. Rather than opposing oppression simply as an abstract ideological stance, you establish what living in this messed up world actually means. Day-to-day how it drags them down, hurts people they love, and makes them do things they regret. Knowing that underscores every decision you make during your game and will likely lead you to interesting discoveries!

Conversations about character backstories often seem to include all those cliches we’re familiar with. Is that bad, though? Are tired tropes harmful?

I am of two minds about this. On the one hand, playing an RPG is something you do for yourself. Who cares if there is an idea that is overused or cliché! If you think it’s fun to play a warrior who is built like an ox with a head full of rocks, then you should have a blast without feeling self-conscious. You can assemble the outline of a character with a bunch of familiar tropes and still end up playing someone with satisfying depth.

All that said, some cliches and tropes are based on harmful cultural stereotypes. This is where I think continuing to indulge tropes can have a harmful effect on your game, players, and the RPG hobby at large. It doesn’t matter if you don’t think of yourself as racist or you know that in real life people are complex and worthy of respect—if you put a tired trope like “cannibalistic natives” in a game, you are to an extent keeping that offensive idea alive. I think it’s worth examining tropes and asking honest questions about what they are saying. Is this harmless fun like a classic “enemies to lovers” or is it an idea that we don’t actually need to keep including in our storytelling?

Some indie games have backstories as a fundamental part of character generation. Wanderhome by Possum Creek Games, for example, has players ask fellow gamers their left and right questions about how their characters might have interacted in the past. Does this tend to make for better games?

I personally prefer this approach to games! Framing backstory development as questions between players encourages it to take the form of a conversation—an exchange of ideas. I think it helps players buy-in to their own characters and each other’s. I find I have more fun when I really care about my character and their companions. I also think having these backstory conversations as a part of play helps GMs frame their setting and plot development around the PCs as you get a better sense of what everyone is looking for.

However, I don’t want to encourage the idea of any style of play being “better” than another. I think there are clear advantages to this approach, but they won’t work for every game or every group. If you are playing a game like Dungeon Crawler Classics where PCs die more easily, this sort of backstory development might actually feel disruptive to the experience.

People can buy The Ultimate RPG Character Backstory Guide to learn from you about how to craft backstories, but what three tips would you give readers here and now?

#1 Communicate! Talk about the ideas you have for your character with your GM and fellow players. There is an instinct to make certain things “secrets” or “surprises” and I often find it hurts more than it helps. While you drive your character’s story you aren’t playing alone. If you want to have an impact on your game you need to share in and out of character to give people a chance to interact. I promise it will be more satisfying.

#2 Collaborate! You can go beyond just sharing your ideas by opening them to be affected by the people you play with. This could be working with your GM to fill in details that ground your character in the game’s setting, tying events in your character’s history to the pasts of other PCs, or simply encouraging people to expand your story by asking questions you didn’t think of. I think most players will find that making a character’s story more collaborative results in cooler stories that have a bigger impact on the game.

#3 Make choices important! As you play or add to your backstory, support what you have already created, and use your creativity to support what other people players. That’s as simple as deciding something is significant and focusing on or expanding it. Was your character a pickpocket? Cool! How does that affect their decisions when they see someone struggling with that life? How can that detail—that essentially explains one of your mechanical skills be something that matters to your character emotionally? Also, most GMs really appreciate when players take the time to invest in their setting. A PC backstory can be an active support for their narrative. If the GM introduces an enemy, you can decide to support it by giving your character a reason to fear or respect them. It suddenly makes everything this villain does more impactful and relevant to your PC and it adds flavor to the character your GM wants to establish as a threat.

How does the book expand on those tips?

Haha! Well, I don’t want to just republish the whole advice section here. I tried to keep things simple and encourage people to consider the advantages of a more communicative and collaborative approach to creating backstories.

What was the best character backstory you ever came up with and why did you like it?

Well, my favorite characters appear in the actual plays I run, One Shot and Campaign: Skyjacks. I don’t want to spoil things for potential listeners or say that one is “better” than another. It’s art! It’s all really subjective.

I think my current favorite is Margaret, who is an NPC from Campaign: Skyjacks. I created the character to show off one of the ideas created for the setting by freelancer Ally Brinken. Margaret is a Black Lily—something like a witch/sex worker who draws strength from intimacy and vulnerability and uses it to help people. I wanted her to help Travis, one of our PCs, bring out some of his backstory and challenge his negative patterns of self-destructive behavior. Travis’ backstory is based on The Decemberist’s album The Hazards of Love, which is a rock opera telling a tragic folktale about two lovers who drown in a river trying to escape the godlike Forest Queen who refuses to grant her son the freedom to love.

In the end we discovered Margaret was a folktale hero cruelly caught in a broken story. She faced death and reincarnation to find a new life among the Black Lilies. She chose a lifetime helping people through empathy and grace. It all lead her back to help heal the wounds she did not know she carried.

What I like about her story is how adaptive and collaborative it is. It was the result of trying to honor and support my freelancer, my player, and the work that inspired our setting. I would have never created a character like this on my own. In working to weave all this together I ended up with a character who could easily lead a compelling story of her own. Her past makes all of the things she does in the present so much more interesting.

Which RPGs are you getting to run or play right now?

I have had less opportunity to play than usual after my spouse and I had our first child in January. That said, I play an RPG about 3-4 times a month. I consistently run Campaign: Skyjacks which is a folktale sky pirate campaign inspired by the music of The Decemberists. We started with a generic system that we are slowly developing into a thing of our own. I have done a few playtests for a smaller system I’m tinkering with. I also have the good fortune to playtest games my friends.

Is gaming still a hobby for you, or has it become a job?

Ha! I have been a games professional in some capacity since 2013. I went full-time I think around 2016? It was a slow transition though. I’ll say my livelihood depends on games, but games themselves aren’t the thing that has become my “job.” I record what I play for One Shot and Campaign: Skyjacks, but the job is producing and publishing those episodes. I sell books about RPGs, but the job is writing the books. When I sit down to play it’s still about creativity, artistic expression, and fun.

What are you working on next?

I am working with Adams Media right now on a new card-based RPG accessory concept. It’s based on those conversation starter cards sold for dinner parties and couples. The idea is to give RPG parties a fun and easy way to inject small moments of roleplay into their games and build party interactions around character backstory. I see it as something groups could use to warm up before session, tie in to actual gameplay, or use when not everyone can make it to the game but people still want to roleplay. It’s a new concept for my publisher, but I am really excited about the potential!

I’m also working with Patrick Rothfuss to develop the Kingkiller Chronicle RPG, which I really want to get to a playtesting phase soon. 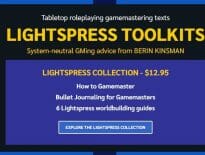