In a Japan ruled by demons, the battle of Awaji island is about to begin. Crunchyroll streamed the first part of Orient and today starts part two.

There’s an English subtitled trailer to get you in the demon battling mood.

Here’s how Crunchyroll describe the series;

During the Warring States era, the feuding generals were suddenly struck down one after another by the demonic Kishin. In the 150 years since, groups of individuals have continued to resist Kishin control. They are called Bushi bands. When they were young, Musashi and Kojiro would hear tales about the Bushi from Kojiro’s father, and the two of them dream to form the strongest Bushi band. One day, as Musashi struggles with his choices, he witnesses humans being torn apart by oni. Forced to face the truth, Musashi rises up against the powerful oni to make his dream with Kojiro come true!

The battle shonen is based on the manga by Shinob Ohtaka and directed High School DxD’s Tetsuya Tetsuya. Studio A.C.G.T. is making the series and the cast of voice actors includes talent from Tokyo Revengers, Jujutsu Kaien, JoJo’s Bizarre Adventure and Demon Slayer.

There’s also a new poster for the series. 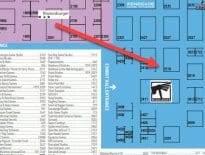