One of the genres I never covered in any great detail in my early articles was the detective genre.

I probably meant to, but I never got round to it. Ironically, the reason I didn’t is a mystery I will never unravel. Given that all of my RPG games contain an element of mystery, I thought I’d finally tackle the subject from the position of building an investigation. Not a genre analysis like I used to do, but more of how to build a mystery and create a game full of the unanswered questions for your players to answer. A lot of this comes down to how you handle the giving of information.

In a standard RPG research moment, players getting clues essentially need to ask the right question at the right time or look up information in the right place and maybe make a roll. And as the GM, you just hand them the information they are looking for.

In a mystery game, this can be the case, but often it’s just the first layer of investigation. If players fail to inspect that data or its sources, there should be a chance the information isn’t helpful, is only the start or only peels the first layer of the onion.

Any complex mystery should have several layers of investigation.

Uncovering what’s going on at the start should both lead to more questions to investigate but could point to the next layer of conspiracy.

There has to be multiple layers and players behind the scene that players aren’t aware even exist at the start of the mystery. They might not have anything to do with the original mystery, but they are pulling strings in a larger game that has caused a less clever operative to act rashly and leave enough clues to create a mystery.

This way, the motivation of the original incident might seem bizarre and hard to understand but becomes clearer as the players see a bigger picture and web of intrigues.

It’s a good idea to draw a flowchart or map of your mystery with all the players and people, so you understand it in your head. This way, you can keep track of how players can get inside each of the layers of the story if they can’t think of a way themselves.

In good mysteries, some people withhold information because it exposes another truth about them. One they don’t want people to know.

In fact, this is true of basically every detective story you have seen. A key piece of information is not forthcoming until another sub-mystery is solved.

Start introducing this structure because it’s a great way to drop a clue and let the players really feel like they worked at it. They resolve the first secret, and it allows the real story to come into sharper focus. You can even include a few mysteries that turn out to be irrelevant or harmless red herrings to give the setting a feeling of verisimilitude.

In a game with limited social mechanics, players might be used to making a quick roll to check if an NPC is lying. But remember that this can also lead to more confusion if you’d like it to. Maybe that person is lying to protect them. Maybe that person believes they are telling the truth. Maybe an insight check simply tells the players someone is ill at ease but not the reason or motivation.

If you make a motivation complex enough, working out some is lying is only the first step in detective work.

Also, remember that things that can’t be checked also can hold information. No one thinks to insight check a dusty tome. But it might be fake. Or just written by someone with a biased viewpoint. Players solving a hard mystery need to be able to not just examine a clue or opinion someone gives them but the context with which it was given. Does that person stand to gain by telling them the truth? Is it just the truth as they see it? Absolute truth should be a rarity.

It’s very easy to solve a mystery when you can just drift through the game and look for information and act on it whenever.

Putting a clock on a mystery can really add tension to the game. So think about where and when you can make things time-sensitive. Maybe if the players don’t talk to a certain person by a certain time, they are murdered because of what they know. Maybe their detecting turns up another conspiracy and now they must choose to deal with and let their original investigation go cold, or keep doggedly on their original path and watch as something else awful happens. Maybe they alert the people they are investigating to their presence, and now they are in danger.

In a long-term mystery campaign, you can do a few extra things that really make things more complex for the characters.

Firstly you can tie secrets and mysteries to things they would rather keep hidden to really muddy the water. This creates players who are trying to solve the mystery in different ways with different motivations, and working out how those things fall is half of the fun of the game.

Also, for a real kick in the teeth, you can have the final part of the mystery be something so huge that its exposure undeniably will harm just as many people as keeping it covered did.

Then the players have a very difficult question to answer. Do they keep this secret and maintain the harmful status quo? Or do they tell and embrace painful change? And can they live with that decision?

So that’s it for running a mystery and things you can do to take the game into a level of intrigue you might be craving. Next, we’re going to engage in a little healthy competition as we talk about running a different type of narrative encounter – The Tournament! 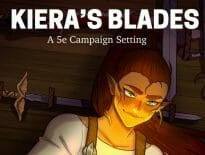 Tabletop & RPGs Kiera’s Blades: Name Your Own Price for this…