Two thoughts. Firstly, these initial star reviews for the new TV anime of Rooster Teeth’s RWBY aren’t amazing. At Crunchyroll, which has started to stream the series, the average is 3/5.

The second thought is I’m so far behind the anime trailers that the shows, like this one, have started.

The opening theme is by Void_Chords, features L, and is called “Beyond Selves”.

RWBY: Ice Queendom’ presents RWBY in beautiful 2D anime visuals. RWBY imagines a world filled with horrific monsters bent on death and destruction, and humanity’s only hope is dependent upon powerful Huntsmen and Huntresses. Ruby Rose, Weiss Schnee, Blake Belladonna, and Yang Xiao Long are four such Huntresses in training whose journeys will take them far past the grounds of their school, Beacon Academy. Though each may be powerful on their own, these four girls must overcome dark forces and work as a team if they truly hope to become the next generation of Remnant’s protectors.

The cast, both English language and Japanese, are back for this new run. 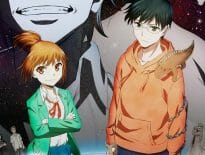 Anime Listen to the Lizard: Lucifer and the Biscuit Hamm…