You are here: Home / Geek Stuff / Possessed by music: Phantom of the Idol trailer

Phantom of the Idol is an anime about a boy band/duo in which one half is a lazy git. Yuya doesn’t care about the art, the audience or the profession.

Backstage, Yuya meets a girl who just wants to perform. The problem? She’s been dead for a year. The latest trailer for Phantom of the Idol makes it clear how that works out…

The anime series is due out on July 1st and is based on Hijiki Isoflavone’s manga Phantom of the Idol.

Dororo animation director Saori Hosoda has done the character design with Studio Gokumi at the helm of the musical project. The director is RADIANT’s Daisei Fukuoka.

Kodansha USA have an English manga on the go and describes the series;

Yuya, one half of the boy pop duo ZINGS, may be the laziest performer in the Japanese music industry. His partner is out there giving 110% every night, but Yuya’s sloppy dancing and his frankly hostile attitude toward the audience has the fans hating him and his agent looking for any excuse to cut him loose. The career of a pop idol just isn’t the path of easy leisure Yuya expected…

After a particularly lifeless concert appearance, Yuya meets a girl backstage. All she wants from life is to perform. There’s just one problem: She’s been dead for a year.

Possessed by music: Phantom of the Idol trailer 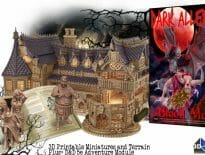