This is Audio EXP for the 21st of May 2022, and the title of this episode is “People Do Bad; DriveThruRPG hacked”.

[The following is a transcript of Audio EXP: #149]

The interview with Mike Sixel is up, and we end up chatting briefly about augmented reality and D&D. He’s playtested ARcana, that’s a system which uses smartphones to create augmented reality virtual tabletops in your home.

I like the idea; have friends over, make them coffee, eat the biscuits they brought and still have some of the functionality of a virtual tabletop.

We’re yet to see it work as dreamed. Mike, though, thinks it’s a matter of time.

I titled the last podcast People Do Good because I was gushing about the kindness of the RPG and the tabletop community. I was thinking of Ukraine and the battle for human rights in the States.

There’s been more of the same. Right now, on Itch, $5 will get you the bundle TTRPGs For Reproductive Rights and secure you more than $1,000 in RPG downloads.

So, why, then, do I call this one “People Do Bad”? I’ve spoiled that in the title, just to be precise; there’s been a security breach at DriveThruRPG.

Also, while the team is still investigating, there’s no evidence that any customer data was compromised.

It looks like a hacker was able to deface products and also change prices. If you’ve bought something on Friday night, check that somehow you didn’t pay $1,000 for it. If you did, get in touch with DriveThruRPG, and they’ll sort out you.

I know, I know, I usually only get to the title of the short news podcast about halfway through. Some people do it to keep listeners on the stream as a ploy. Not me. I just structure a narrative for the show that makes sense but pick the headline from what I think is the biggest news. It doesn’t always make sense to start big.

In this case, though, I wanted to address this upfront as I don’t think there’s any reason to be at panic stations. However, as usual, make sure you have a unique password for every site and go check your DriveThruRPG account.

So, since I made claims to trying to have a structure to this podcast, let’s stick with DriveThruRPG.

Why? Steve Wieck, who owns the company, explained on a RPG.net thread which surfaces suggestions that the owner of the company has Nazi sympathies. It’s pretty horrific what’s been unearthed. The same person also creates game content for the latest version of the TSR company. The one suing and being counter-sued by Wizards of the Coast.

Yeah, I think it’s going to get messy. Hopefully, it’ll be messy is a good way!

On the RPG.net thread with the Nazi expose, Wieck just says “In light of recent information” and does not elaborate.

That’s what you get to do in capitalism, and with no government forcing you to stock individual or every game maker. You get to pick who you work with. Just as we consumers get to decide who we buy from or don’t buy from.

That’s one divorce then, DriveThruRPG and Dave Johnson Games, and here’s another. Dice Hate Me have split from Greater Than Games.

Greater Than Games is a board game company that’s been buying others and was bought itself. The mergers and acquisitions in the tabletop space are incredible.

The experiment has ended, the two companies have divided the games between each other, and life for both continues.

Another departure, a big one, has happened at Paizo Publishing. The Pathfinder and Starfinder owner has announced a new President. Jeff Alvarez is stepping down and Jim Butler is stepping up.

Good job and good luck Jim. Paizo has a unique place in the marketplace, isn’t afraid of making big moves, and has more to lose than most in the space.

I look forward to seeing what Jim does.

I also look forward to the bleak, blood-splattered, demon-ridden gore of Chainsaw Man.

The manga has an anime, and it’s coming to Crunchyroll.

If you hunt demons with a demon chainsaw, die and then make a pact with said demon chainsaw to come back to life, your life will get…. messy. This time, though, it might not be messy in a good way.

Another battle I’m looking forward to is Prey.

There’s a tiny clue in the name. That’s Predator 5, a prequel and I think when the hunter first arrives on Earth. The alien will be up against a Comanche Nation warrior. I look forward to the political bickering, but I really just want more Predator action.

The first movie was great, the second good and, er, I’m not sure I’ve seen three and four unless those were the Alien crossovers.

I’m not sure who the prey is in Prey, which I think is the point. IMDB also tells me the movie might be known as Skulls in some countries, and I wonder if that’s a political or cultural decision. It’s hard to imagine what the marketing justification would be.

One last “Looking forward” for you but also curiosity. Two anime will be released on the same day in October. One is To Every You I’ve Loved Before and the other is To The Solitary Me That Loved You.

Both are based on books of the same name, both books came out on the same time.

Both are sequels and prequels of each other.

In the story universe, crossing between worlds is common.

In one story, a boy stays with his mother after a divorce and struggles to fit in socially. His life is changed when a new schoolmate introduces herself as a lover from a different dimension.

In the other story, a boy stays with his father after a divorce, does well, meets a girl and sparks fly. However, their parents decide to marry first, and so to avoid being step-siblings, they skip worlds.

How the two tie in, which they do, is beyond me, but it sounds like an exciting idea. You can watch them in any order but what a decision to make!

Before we get on to the bundle deals, I also wanted to call out the Backroads: City of the Arch preview on Geek Native.

It’s the first official expansion for Backwater: Southern Gothic Horror, which looked great but wouldn’t/couldn’t ship to the UK. City of the Arch is all about exploring the post-apocalyptic future of America.

Backroads looks to be a way for me to get Backwater now, but I’m still on my Kickstarter diet, so I’ll try and rest the temptation.

I’ve disclosed some exceptions. I will back Cowboy Bebop the Roleplaying Game when it comes out.

The playtest rules are now out and free from DiveThruRPG. It’s about 30 pages, not the final form, but it looks promising indeed!

Now, in the bundles, and there’s good news: Monte Cook Games are celebrating their 10th-anniversary in style.

I failed a willpower role and took a crack at the use of the word ‘massive’. Digital downloads have no mass. Oh well.

And on that note, let’s wrap up there, enjoy physics and see you next week. 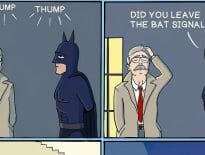 Comics Comic: The mystery of Batman’s light by The … 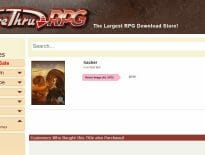