You are here: Home / Games / Tabletop & RPGs / An RPG of punches and friendship: Fight to Survive

There’s an exclusive picture preview below of some classic backyard training. That’s a familiar scene in the 80s martial arts movies Fight to Survive seeks to emulate. I also had a chance to talk to James, just briefly, and you can find that below.

You can find out more or pledge from the project page.

A successful campaign will produce a 200 (ish) page, full-colour and perfect bound paperback. There will also be a PDF of the core rules and a quickstart to get people into the game.

The art’s by Ian MacLean who has illustrated for Call of Cthulhu and Pathfinder before.

Despite being a fighting game, it’s also a theatre of the mind game without maps, minis or even dice. Combat is determined by comparing moves, with certain moves trumping others until there’s a winner. There are numbers, there is a mechanics system, but there’s no rolling mathrock.

Fight to Survive is described as “rules-medium” and each session advances the game calendar by at least a year, perhaps three, so it’s possible to play a series of characters and explore a martial lineage.

An interview with James Kerr

A brief one. Punchy!

Where does the Heart come from in Fight to Survive?

The heart of Fight to Survive is the relationships between the PCs and with the NPCs. As much (or possibly more than) martial arts, PCs in Fight to Survive are defined by a system of Comforts – the people, places, and things that are important to them. Each PC also has a score called “Hardship”, which is whenever something bad happens in their life, they gain a Hardship. If this score gets beyond a certain point, the PC loses the heart to fight and leaves the city.

The only thing to keep this from happening are Comforts – going to see your girlfriend, visiting your favourite bar, or driving your sports car, and so on, reduces your Hardship. Comforts are also what’s put on the proverbial chopping block every game session. You have a girlfriend named Cindy? She’s been kidnapped. If you don’t get her back that’s more Hardship. If you rescue her, your Comfort for Cindy goes up by 1.

The very heart of Fight to Survive is the tension between Comforts and Hardship, leading your character down a path of conflict so long as they participate in a violent lifestyle.

How does a multi-generation fighting game work? Is there a movie or series to reference?

Every game session of Fight to Survive covers a time period of about 1 to 3 years, so as you have more sessions your character progresses, and ages, through the 20th Century.

As a PC ages they improve in their skills but become increasingly less able to take the punishment (both physically and emotionally) that a harsh world doles out.

You reach a point where your character is too riddled with long-term injuries, teeters so finely on the edge of quitting for good, or has come so near a bloody death so often that they’d rather retire, and allow a new character to take up the mantle of their martial lineage.

The person you pick as your character’s successor is probably already one of their Comforts. Different players will pass the baton of who is their player character at different times and for different reasons, so you end up with a very complex network of interconnecting relationships as you build up the community of martial arts and fighting as players.

How much of a leap is it for groups previously only familiar with high-fantasy 5e to Fight to Survive?

Fight to Survive is a huge leap for groups only familiar with high-fantasy like Dungeons & Dragons 5e. It’s not more complex, but it has a completely different tone, attitude, and mechanical approach. For instance, the rules are more abstracted in attitude, it has a different relationship in terms of GM responsibility, and it works on very different assumptions about how you relate to your character.

For example, tone: Fight to Survive is not a game about martial arts superheroes; it is not a power fantasy. It is closer in tone to some OSR or early editions of D&D like B/X or BECMI in that part of its tone is surviving and human fragility in a much wider world with workings beyond your understanding. (Except, in Fight to Survive this is relevant emotionally as well as physically.)

Fight to Survive is not so “realistic” as to not be fun – emulating the mundane does not mean to enact the boring – but its tone is somewhere around the TV-series Cobra Kai, whereas D&D 5e is more like a Marvel movie. Not every role-playing game is the same; and shouldn’t be the same. Let’s tell different stories.

Playing Fight to Survive is like watching Bloodsport (1988) or Hard Times (1975) or Streets of Fire (1984). It’s cheesy, but it’s done with a straight face. It has its own kind of tragic, glorious, sweaty fun. ‘Heroes’ don’t always win, but you can get to do some great things in the meantime.

A pledge of CA$16 is enough to get the Fight to Survive digital edition, accessories and stretch goals as a reward. There is a tier before that, limited in number and for people who are struggling. CA$16 is about £10.

Backers who can high-kick at a CA$22 level also get the print edition code in their rewards. That’s an at-cost, not a free, coupon.

Then, at CA$35, backers who support with that level of generosity also get their name in print in the book.

There are higher tiers for games with James or the honour of creating one of the RPG’s stock fighters.

The digital delivery is slated for June this year, just around the corner, while the print products are estimated for August.

An RPG of punches and friendship: Fight to Survive 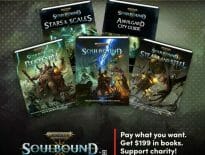