Sláine is a Celtic fantasy adventure comic from Judge Dredd and the 2000 AD publisher Rebellion.

The Sláine Miniatures Game, penned by Andy Chambers, Roger Gerrish & Gav Thorpe, is the third of Warlord Games’ 2000 AD offerings. Unlike the sci-fi-infused ranged-combat that dominates Strontium Dog and Judge Dredd, Sláine is set in a fantasy world (created and immortalized by the legendary comic creators Pat Mills and Angela Kincaid) and thus is more concerned with the clash of sword & axe and opposing magics. Though aficionados of the previous two games will find a lot of familiarity in the broad mechanics of Sláine, there are a number of key differences that firmly cement it as its own beast.

Sláine will be a high tempo skirmish game in which small groups of warriors tussle in pre-history battlefields to determine our fate.

Players will recruit legendary heroes, such as Sláine, into their Warband.

The Starter Set will be known as Kiss My Axe, named after Sláine’s own phrase, will include scenery and rules and lists for the Earth Tribes, their enemies the Drune Lords and other forces.

Pre-orders begin for the game on Friday! There’s a pre-order bonus mini on offer in the shape of Sláine the King. 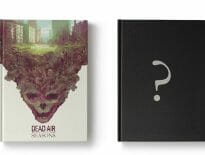