I’ve won multiplayer computer games before without ever knowing why. To be honest, if I ever win at online games, it tends to be weird situations like that.

Tim, aka eldercactus on Instagram with nearly 50K followers, has a theory as to why it might happen in adventure cRPGs.

Does that boss remind anyone else of Geek Native’s Mr Root, the news minotaur? Yeah, you can get him as the highlight on your extra wide and super cool mouse pad these days.

The webcomic has three tiers, $1, $3 and $4, with early access offered at first the first level. Bonus panels are added next, and then at the $4 tier, you can vote for what comic ideas get made.

Comic: And then you win! 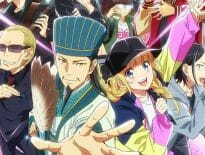 Anime Flip it around: Ya Boy Kongming! changes the Iseka…