The fantasy webseries AFK is about a gaming group that find themselves in their MMO characters.

It’s team AFK who’ve put together “First Day” as a test for an upcoming miniseries called “A Hole in the World”.

First Day was made entirely in Unreal Engine 5, that’s generally used for computer games but, as you see here, perfectly adaptable for animation.

Unreal Engine 5 isn’t out yet, though, not fully. That’s slated for early 2022. Unreal Engine 4 has been the main version of the system produced by Epic Games since 2014.

The “Nanite” feature in Unreal Engine 5 has many people excited, a feature that allows high-resolution photographic source material to be directed into games. The technology is made possible, in part, by Epic’s acquisition of Quizel, which is the world’s most extensive photogrammetry library.

As with other short films on Geek Native, you can use this teleport link to leap from here to another random selection. What will you find? 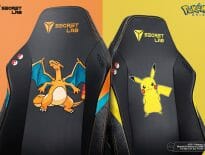