You are here: Home / TV / Anime / From life support to elf: In the Land of Leadale shows life as a 200-year-old elf mother

The latest key visual for In the Land of Leadale suggests a very different tone from the newest trailer.

In the Land of Leadale is an isekai as it surely must feel every other anime is these days. Our hero, Keina, wakes up one day and is a character she’s created. It means jumping ahead with life hugely by becoming a 200-year-old elf mother.

The series is based on the light novel by Ceez and Tenmaso.

Yen On has the license for the English translation, and the stories are available on Amazon.

The publisher described the story;

Due to a terrible accident, Keina Kagami is forced to live on life support in order to survive. The only way for her to be free is within the VRMMORPG “Leadale.” One day, her life support stops functioning, and Keina loses her life. But when she wakes up, she finds herself in the world of Leadale 200 years in the future. She is now the half-elf Cayna, who possesses lost skills and OP statuses and becomes closer to the other inhabitants of this world. But among those inhabitants happen to be the “children” she made in character creation?! A very chill adventure filled with laughter and tears(?) about a girl who transferred into a game world and her very unique friends is about to begin!

In contrast to the meet-the-family trailer, the latest key visual for In the Land of Leadale is all action. It shows Keiana preparing to battle against kaiju, standing with a fairy ally even as the fire erupts in the foreground.

The anime starts in Japan shortly, running on January 5th, and Crunchyroll has confirmed they have picked up the series and will air it too.

From life support to elf: In the Land of Leadale shows life as a 200-year-old elf mother 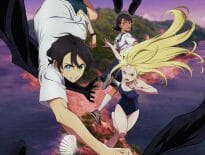 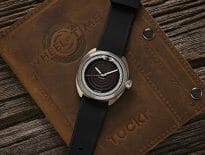