You are here: Home / TV / Anime / Is MgRonalds a source of evil? The Devil is a Part-Timer!! season two trailer

I just about remember The Devil is a Part-Timer!!, having reviewed it eight years ago.

The actual devil flips burgers, wants to get promoted and gets annoyed when an SFC franchise (chicken) pops up next to his own MgRonalds (burgers) fast food restaurant.

To my shame, the eight-year-old me talked about the series’s poor comedy and acceptable action sequences. It has demon fights.

How I missed the chance to double-down on the fact that Satan, his god-damn-self, is working in the capitalist palace of fast food while hustling for promotion is lost on me.

If you want to catch up; then the series is still on Funimation. Season two is due out mid-way through 2022.

The trailer for season two doesn’t tell us much more, especially if you can’t follow the Japanese. I can’t. I see life as usual; Satan is friendly, looking after customers, and attracting a crew of quick to anger demon women.

There is a new character, though, Alas Rumus, a young girl born from an apple. You can get apples in MgRonalds these days, by the way, slices of them come in little plastic baggies.

Not all the cast and crew are returning for season two, and I don’t blame them, not after eight years, and there’s a new studio and director. The two leads, Ryota Ohsaka, return as King Satan and Yoko Hikasa as the Heroine Emilia who kicked him out of his last realm and to ours.

Yen Press have the manga rights for English language and that’s up on ComiXology. They describe the show;

Do you want fries with your hellfire? Being soundly thrashed by the hero Emilia, the Devil King and his general beat a hasty retreat to a parallel universe… only to land smack in the middle of bustling, modern-day Tokyo! Lacking the magic necessary to return home, the two are forced to assume human identities and live average human lives until they can find a better solution. And to make ends meet, Satan finds gainful employment at a nearby fast food joint! With his devilish mind set on working his way up the management food chain, what will become of his thirst for conquest?!

Also, I didn’t make enough of the fact that the actual devil doesn’t think MgRonalds pays enough. There are minimum wage jokes throughout season one presented as a matter of factly as the demons serving chips.

Is MgRonalds a source of evil? The Devil is a Part-Timer!! season two trailer 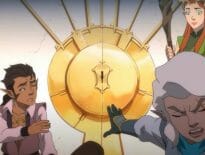 Comics Um, the Critical Role trailer tempts me with heres… 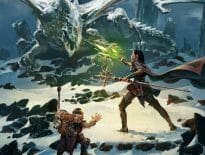