You are here: Home / Geek Stuff / The best present: Boxes which keep on giving

Have you ever succumbed to the dark lure of competitive Christmas gifting? In this post, we’re about to find out what’s a popular purchase.

It works with birthdays and other occasions too. It might start with the worry you’ll give a bad gift or the worst gift of a set, which are innocent worries and understandable. It’s a short hop from there to wanting to provide a better gift than anyone else. That’s not the same as wanting to give the best possible present to someone you care about.

A tightrope of good intentions, huh? I think a geeky subscription box might be an answer. I think it might be a gift that keeps on giving throughout the year and something that lingers beyond the commercial rush of Christmas day.

My argument was that rather than spend £100 on a gift for your brother, for example, spend £10 on him every month for a year. A regular surprise, a frequent delight and geeky goodies he might not have otherwise bought for himself but wants anyway.

Surprising no one, Pop In a Box agreed with my hypothesis. There’s also the point about not putting all your eggs in one basket. Subscribing a family member or friend to a geeky subscription gift box for a year or however long you want maximises your fancy of landing an “I love this!” response.

Which are the most popular geeky gift boxes

In search of data to turn this hypothesis into a thesis, I got the five most popular subscriptions from Pop in a Box.

I’m surprised to see Harry Potter ahead of Star Wars, but PIaP is a leader in the geek subscription space. These are robust stats.

There are different tiers within these. At the top, it is pretty hardcore. I concede; not likely to be suitable for casual Christmas gifts!

I don’t have stats on which of the tiers are the most popular. I imagine it’s pretty close to the numeric order.

It’s worth noting that not all subscription deals are models from Funko. Just off the top of my head, there’s also;

As it happens, this data comes back to me just a day before the Black Friday / Cyber Money sale rush.

Meanly, there’s a TOCK approach being used on us this year. Pop over to the Black Friday flash sale page and use the code TOCK to secure a discount.

The best present: Boxes which keep on giving 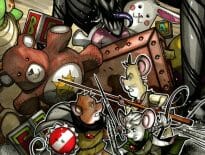 Tabletop & RPGs Things That Go Squeak in the Night: A TTRPG about …