You are here: Home / Geek Stuff / Wizards of the Coast lose their Creative Lead as Adam Lee leaves

Adam Lee has worked for Wizards of the Coast for nearly 12 years. Starting as a narrative and game designer for Magic: The Gathering in 2010, Lee moved to Dungeons & Dragons in 2014.

This year, Adam Lee became the Creative Lead there, but only 8 months later, and he’s leaving the company.

He announced the change in a tweet, explaining he’s on to new adventures after making lifelong friends. He hasn’t said where he’s going.

Adam Lee was the author of the mithral best-selling Adventure with Muk, a Pay What You Want D&D adventure about a brave goblin and Birdquirrel that raised money for Wizards of the Coast’s charity partner Extra Life. 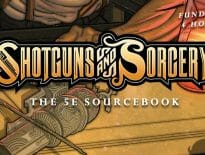