A rules update from Kickstarter today could have significant implications for crowdfunding and publishers who rely on it. They’re designed to help protect backers.

The platform had said that publishers and creators may not have more than one campaign running simultaneously. A Kickstarter project that is still fulfilling pledges is an active campaign. The rule, as written, would mean all rewards from all tiers would have to be delivered before a new crowdfunding campaign is launched.

As a result, publishers can not start a new project until the old one is completely done. It is currently commonplace to overlap projects.

The rule, of inforced, will make business much harder for publishers. Perhaps appropriately so.

Projects that run into fulfilment difficulties will be even more damaging. Publishers must manage their pipelines carefully, stacking things to keep the pace of new games appropriate to the market and staff busy with work.

However, there is a significant loophole. Games publishers in good standing may still be fulfilling up to two other projects and start a third.

Comic book creators and publishers (they do not say whether an RPG book is a game-game or a publisher-game) are allowed to have up to 6 unfulfilled projects, whereas design and technology creators only 2.

The difference between game and book may well influence adding dice or other accessories to Kickstarter projects. VAT laws and book exemptions some countries offer are already a pit trap for game developers to avoid regarding tokens and other non-book deliverables.

In one final twist, Kickstarter does detail what good behaviour is and emphasises clear communication, along with rules, community and honesty but does not have a formal process for “good standing” is.

Kickstarter’s Trust and Safety team will assess each creator for overlapping fulfilment issues during each project review.

During ZineQuest this year, Geek Native observed Kickstarter projects from individuals who all work for the same publisher being launched. These campaigns were in the name of the individual creator, not the publisher, although the books are branded and part of the publisher’s catalogue. Kickstarter’s view on this is not known. 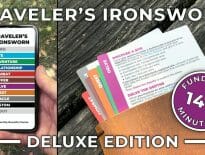