You are here: Home / Games / Tabletop & RPGs / The hero zombies and long dark: Nightfell for Tombpunk comes to Kickstarter

Outland have their next RPG project for Alan Bahr’s Tombpunk up on Kickstarter. Having created the fo-fi fantasy rule system, they’re using it to power RPGs for their graphic novel collections. They call these micro-settings.

In Nicolas R. Giacondino’s Nightfell a common fantasy trope is flipped, and zombies are the heroes. The campaign has been funded but was created with barely over a week on the clock. There’s still time to take a look or join in.

You will need the Tombpunk core rules to play. The upside of that is once you have it, you’re not buying the same rules again and again if you follow Outland’s micro-settings.

Aside from the Nightfell setting, this RPG adds three new classes for Tombpunk

There are also new enemies, which might be more portable to other games and new rules for belonging to the barbarian clans of the world.

Welcome to Nightfell: a world locked in a cycle of struggle between the forces of light and dark… or is it? Every ninety years, the world of Berun is subject to ten years of darkness when the shining eyes of the gods close and monsters boil forth from the depths below to devour all in their path. Humanity protects itself with armies made of the dead, the corpseguard, which return to life during Nightfell and stand watch over the cities and strongholds.

You can read a free 20-page Nightfell preview comic to experience the setting.

It’s just $5 for a copy of the PDF rules for Nightfell and they have a delivery estimate of December this year.

Upgrading to $8 gets you the at-cost code for a DriveThruRPG print-on-demand for the softcover. That’s the hardcover at $12, and sadly it is worth noting that both printing and shipping costs can be high depending on the quality you want and where in the world you are.

There are other tiers. $20 gets you the hardcover (and PDF) novel of the Nightfell graphic novel of the softcover bundle (more print-on-demand codes) for the Tombpunk core rules, Nightfell and Rogues RPGs.

At $30, those bundles become hardcover instead.

The hero zombies and long dark: Nightfell for Tombpunk comes to Kickstarter 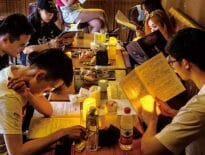