You are here: Home / Games / Tabletop & RPGs / Rifts for Savage Worlds: Atlantis and the Demon Seas rises on Kickstarter

Palladium’s sci-fi setting, in which Earth has become the dangerous battleground for all sorts of aliens and mutants, advanced science and magic, RIFTs, is now available for PEG’s Savage Worlds.

A new, launched recently, only live for one more week but already smashed targets Kickstarter for Atlantis and the Demon Seas will now add another book to the growing collection.

The supplement adds new gear and introduces tattoo magic and bio-wizardry to the setting, along with stone pyramids.

The rules offer up the powerful True Atlanteans as PC races and a new faction for the Megaverse with the New Navy.

Shrouded by the Demon Seas, birthplace of a wondrous human civilization, and now host to a bizarre cosmic evil: Atlantis is a threat like no other. The massive isle is ruled by the Splugorth, and from it their tendrils of influence snake out across Rifts® Earth. Yet the Splugorth are not the only threat inhabiting the treacherous waters—the Horune Pirates, Naut’Yll invaders, and the Lord of the Deep also haunt the world’s oceans. On their own, each of these menaces is a curse to humanity at sea and onshore. Together, they endanger intelligent life across the planet!

Rifts: Atlantis and the Demon Seas will be a 192-page colour hardback and, for the first time, an “army of pawns” for tabletop skirmishes. It looks very much like it could be one for collectors, and even though I’ve not found the cash to expand my original RIFTS collection into Savage World, this one is tempting me.

A supporting pledge of $25 will get you into the digital action with the Altantis and Demon Seas PDF, the Archetype Dossier and a digital poster map.

That same deal is available in print, with the PDFs coming for free if you step up to $45.

A step up adds in the Save Worlds Figure Flats and the Map Packs for the Ruined City and Atlantis Pyramid to the digital assets and costs $50.

That tier becomes physical at $100, adding printed versions of everything to the rewards, although there’s a $70 map-stuff level in between.

Fulfilment on the digital side of the project is slated for September 2021, with the physical delivery expected to happen in January 2022.

Rifts for Savage Worlds: Atlantis and the Demon Seas rises on Kickstarter 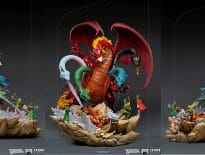 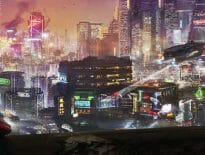