You are here: Home / Geek Stuff / What space job do you think would make a good RPG?

In February, Geek Native had a copy of Pew Pew! Bounty Hunters in Space as the prize for a giveaway thanks to Fainting Goat Games. The winner was picked at random from a list of readers who answered the question, “What space job do you think would make a good RPG?”

When we dig into the results of surveys, I often add the disclaimer that this isn’t scientifically robust research. That’s still true this time, but hopefully, this whimsical topic illustrates clearly the fun we aspire to with such weird questions.

Space rescue response tops the poll. Perhaps there’s room for Thunderbirds in Space, er, given a name less likely to attract lawyers as an RPG project for someone!

As you can see, while Space rescue response comes top, and by some margin, only challenged by space graffiti artists, I’m sorry to report that space bards are the least popular. Or perhaps Josie and the Pussycats in Space (which is an actual show from 1972, 2 years before D&D was published) isn’t such an attractive RPG.

Sorry to say that the competition is over, but you can still pick up Pew Pew! Bounty Hunters in Space from DriveThruRPG.

Despite the lack of competition, this is an evergreen question, and if there are enough responses, it could even be one we return to and map how opinions change over time.

For now, though, here’s the poll again, with the same six options but with “other” added in. If you pick “other”, let us know your ideal space job in the comments below.

Google’s updates aren’t quite in real-time, and the image below is likely cached to save you from downloading it again. What that means is if you want to see how your response changes the pie chart, vote, wait a minute or two and then batter refresh. If that doesn’t work, wait a minute longer, try refresh and repeat until satisfied.

Alternatively, if it’s the competition with loot reward rather than the quirky stats that catch your attention, then you can keep track of the latest via the tag page or by following on social media.

You can also see the most recently launched competition below. 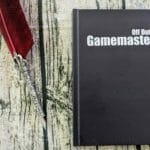 Competition: Off Duty Gamemaster notebook - How often are you the GM in your tabletop RPG sessions? That's the question to answer, with no right or wrong, to win a Geek Native "Off Duty Gamemaster" hardback journal. [...]

Creative Commons credit: Command deck of the spaceship by Igor-Esaulov.

What space job do you think would make a good RPG?