Burning Wheel designer and Kickstarter’s Head of Community, Luke Crane, has left the company after a mutual decision and an apology.

Crane, who started Kickstarter’s Zine Quest and was the games industry rep there before being promoted to his global role as Community boss, tried to run a campaign for The Perfect RPG this year.

It funded within the day and was cancelled as quickly.

Adam Koebel, who had previously announced he would leave the RPG industry after a hugely controversial moment in RollPlay’s Fair Verona live stream, had been included as a contributor to The Perfect RPG. Other contributors said they had not been told about this and started to quit when Koebel’s involvement became known.

Polygon has an email statement from Kickstarter.

After a discussion about what is best for Kickstarter and our team, we came to the mutual decision with Luke Crane for him to leave Kickstarter. We recognize the many years of work Luke has done to help bring creative projects to life at Kickstarter and we are committed to ensure continued support for our team and for our backer and creator community through this moment of change.

Writing on The Perfect RPG updates feed on Friday, Crane apologised. He wrote;

When we began the Perfect RPG project, my only goal was to launch a small collection of micro-games designed by my friends and others whose work I respect in the community. On the day it launched, while the project was falling apart, I did not fully understand what was at stake and what had happened — in the shock of the moment my communications were insensitive and desultory.

So here and now I wish to unequivocally apologize to you, and everyone affected, for the harm I’ve done to the community with this project. I am grateful for your input over the last month, and have done my best to listen with an open heart. I thank you for sharing your opinions and feelings, and know that I have violated the trust you placed in me. I am sincerely, deeply regretful.

In creating the project, I made a series of missteps and miscalculations that added up to a gross oversight on my part and, accordingly, I am fully responsible for the current situation and its effects. So I would like to add some clarification around some of the particular points raised, in the hope that it will help the community as a whole move forward in a productive way: There was no deceit, deception or bad faith in any of my actions around the project. I understand that I should have disclosed the participant list to all contributors beforehand, and I feel terrible that my poor planning placed some creators in a difficult position.

Games are big business for Kickstarter and come in at about one-third of the company’s revenue if you include board games and video games too.

Kickstarter’s email notes that Crane hadn’t been involved with the game side of the business for some time, adding;

We’re proud to have Anya Combs as our Director of Games Outreach, who has been at the helm of that work for over a year now. We have the utmost confidence in the dedication, creativity, and commitment she has consistently brought to her work with the Kickstarter games community.

Sigh… guilt by association; a logical fallacy that has destroyed many lives. If only people could appeal to reason, rather than emotional knee-jerks. Clearly, Adam Koebel is responsible for acting inappropriately, but his actions are not a contagious virus. As such, Luke Crane did not inherit Koebel’s wrong deeds merely by associating with him. Judging Crane so harshly comes across as mean-spirited.

Isn’t the backlash mainly because he didn’t tell any of the contributors before hand and then seemed to obscure Koebel’s involvement? Certainly, Crane’s apology seems to concede that.

Luke Crane apologises and leaves Kickstarter after The Perfect RPG 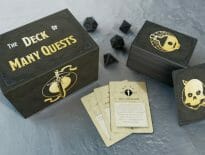 Tabletop & RPGs An exclusive look inside The Deck of Many Quests 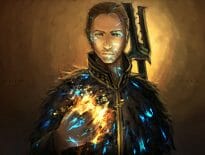