You are here: Home / Books / The Fuller Memorandum review 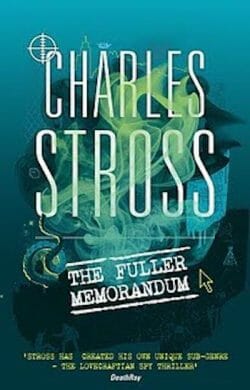 is the third book in Charles Stross’s Laundry Files series. I don’t know when the series became known as the Laundry Files, but as our hero works for the Laundry and I sometimes describe the series as the X-Files meets Lovecraft I guess the “Files” extra works.

Of course, that description is only useful to people who know Lovecraft. That’s most of my friends, though, and I suspect the bulk of the people who buy and enjoy this series too.

Interestingly enough, I got started on the Laundry Files when Cubicle 7 announced they had the RPG license. There you go publishers; RPG licenses boost core product sales.

I tend to enjoy books that make me think and catch me out. Despite saying that I can say that The Fuller Memorandum was the most predictable of the Laundry Files but yet the one I enjoyed the most.

I enjoyed it because we were working with characters that Stross has introduced, built up and who we now support. I want Bob Howard, our hero, to be able to survive the red tape nightmare that is the British Civil Service. He’s a computational demonologist and if that wasn’t hard enough – he also have to survive “paperclip audits” and ridiculous outsourcing ideas pushed by the bean counters. If Bob’s powerful then I certainly want to know what his mysterious boss Angelton might be able to do.

There are changes, of course, Bob’s a high-tech hero so his trusted Treo has been upgraded. He fell to Apple’s powerful magic and bought an iPhone. As Mo puts it;

“Bob loses saving throw vs. shiny with a penality of -5. Bob takes 2d8 damage to the credit card…”

Little wonder the series will see life as an RPG, huh?

The Fuller Memorandum is also a good read because we get to discover a little bit more about Mo and her musical weapon of choice.

Stross gets the pacing of The Fuller Memorandum exactly right. It’s better than The Jennifer Morgue in that respect. Another key Stross-characteristic is that he doesn’t dumb things down. If a character works something out there’s no awkward aside to the reader to explain it. In other words, you’ve got to keep up with the chess game of the diplomacy between the powers (in this case; the Russians… perhaps!) yourself. If you don’t then you’ll be more surprised/confused than the characters. Equally, if you work something out before the characters then the book still makes sense, Stross knows he’s given the readers enough clues to be ahead of the characters and still manages to write for both. It’s a clever trick.

One of the serious attractions to The Fuller Memorandum is the H.P. Lovecraft angle. You don’t have to have read the Lovecraft books to enjoy The Laundry, in fact I’d even say you don’t even have to enjoy the Lovecraft books (which tend to be harder to get into) to enjoy the Stross books, but if you are a fan then it’s hard to imagine not lapping up The Fuller Memorandum. What we have is a British government fully aware of the cyclopean horrors from beyond time and space – and their attempts to do something about it. What works is the fact that Bob Howard knows they’re going to loose – but they’re going to try their best anyway. It’s that plucky British spirit. Perhaps just a touch of James Bond… but perhaps a touch of Chuck too! (Okay; I know Chuck’s not British)

In summary: I enjoyed The Fuller Memorandum and whisked through it in just few Edinburgh-London, London-Edinburgh flights. It’s a recommended reading to all gamers and geeks. 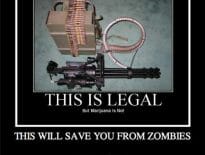