Svalbard is an RPG and adventure from the Norweigan publisher Two Starving Gnolls. The game uses a simplified system focusing on action, and the primary mechanism is “Explore, Die, Repeat”.

Characters will die. They’ll need to for the game to progress. This Lovecraft styled adventure has a system that brings characters back from the dead, respawning like in the movie “Edge of Tomorrow” as part of gameplay. The game is likely to fund on Kickstarter, and you can find out more at the project page.

The standalone Svalbard scenario draws on roguelike and Lovecraft. Set on a Norwegian archipelago, close to the North Pole, in 1993 players take the role of resourceful soldiers sent to explore a secret Russian mine.

If you can’t die then what’s the challenge in the game? Svalbard is a race against time. If the clock beats you, then it’s over.

A similar at-cost deal for the hardcover costs NOK 270 (€27), and there are higher pledges.

The current rate of pledges on this newly launched project suggests it’ll do well. Stretch goals include a custom-made soundtrack, more art, high-resolution maps, and a GM screen, pops and badges. 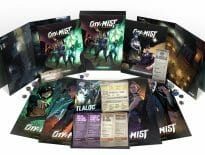