You are here: Home / Books / Comics / An introduction to the dark London Gothic

London Gothic is a graphic novel due out in the spring of next year. The trailer is just out.

London Gothic is a horrific historical tale, and as we discover later, the storytellers will be pulling no punches.

The plot moves back and forth through the time of man, into light and dark as well as myths and monsters. As the name suggests, the story is set in a fictional version of London, one full with depraved and impoverished humanity and where evil lurks.

There’s a chance to appear in the comic.

Now, Geek Native can’t promise you won’t be one of the ghouls featured in the trailer, a victim of the monsters or a force for good. Geek Native can point you at the tweet that tells you how to enter.

I had a chance to catch up with London Gothic’s creator and author Nick Henry, as well as the story’s illustrator and character creator Mike Burton for a few questions.

Can you describe London Gothic in two sentences or less?

Nick: London Gothic is a new dark, mysterious and twisted horror graphic novel set in a fictitious Victorian era of London. It paves its way through history taking the reader on a gripping journey in an amazing world created from my insane imagination!

Mike: London Gothic is a dark, action, story driven graphic novel set in a world with a rich history spanning thousands of years. Myths of monsters and demons are real, and our story follows the brave few willing to fight back against the overwhelming power of the dark.

What’s the atmosphere of the graphic novel?

Nick: Dark, gritty, gruesome but at the same time filled with moments of humour and tenderness, imagine being transported back to that era on a moonlit night with mist rising from the dimly lit oil lamped cobbled London streets, dark alleyways containing shadows that take shapes of nightmarish things created in your imagination and are watching and following you, and all the time you’re getting anxious wondering what’s going to jump out from them….. That’s London Gothic!

Mike: London Gothic feels gritty and real, true evil permeates, oppressing society and it’s growing in power. There’s a spark of hope in our main characters but their task is a monumental one.

What sort of impact do you want to have on readers?

Nick: Ideally we would love them to lose themselves in a different world in an era long gone and send their imagination into overdrive, it seems to have done that to anyone who has been privileged to read the script or see our characters as they have developed, we say they have been London Gothicfied!, We also decided to go full colour, for something so epic we just couldn’t justify black & white providing the effects and backgrounds of a depraved and destitute London of the time we really wanted to portray, there are also small clues and storylines weaving throughout that will lead the reader to those WTF moments!”.

Mike: We want our audience to experience a full range of emotions whilst reading London Gothic, they’ll laugh, gasp and cry and hopefully have some sleepless nights. We are also really looking forward to people becoming invested in the world and its history, this story has been written over 30 year’s, so every detail has a purpose and is steeped in lore.

What was the first comic or graphic novel that made you feel like that?

Nick: I am fairly new to the graphic novel world and always been more of a horror movie fan, but I have had this idea and characters spinning around in the void of my head with the Brussel sprout that resides in there for over 30 years, I have taken inspiration from a lot of the classic Horror films I watched as a kid and have written it in an old school kind of way. I also walked the streets of London in my youth where the creepy scenes started to evolve in my head, streets that send a chill down your spine, and that’s where the initial idea for LG started to evolve.

Mike: I would have to say Moore’s Marvelman and subsequently Moore’s and Gibbons Watchmen. Not only do they take a deep dive into the psychology of the characters being affected by the story but they both draw on a long history, in Watchmen’s case one that was created specifically for it.

Are there any traps or tropes you’re trying to avoid with London Gothic?

Nick: Our novel is going to be quite graphic and we don’t want to have to tone it down or have your typical clean cut, perfect heroes who seem to win all the time, I built in a connection of feelings people experience in the real world. But the bad guys….well let’s just say you really will hate them!

Mike: On the art side of things, we want the main characters to be very real to contrast with some of the supernatural elements & human physiques. There are no super men or women in this book. Their body proportions and looks will be accurate to the time period and real life.

Would you allow someone else to develop a sequel or spin-off with only light touch input from you? Why?

Nick: I feel it is too early in the project to think about that, however if the right deal appeared, we would have to consider it, I see this more of my life’s ambition at the moment and after many people saying “That story sounds brilliant, you should get that on paper” thought I would give it a go before I pop me clogs! I managed to save some money over the years specifically to bring LG to life and am self-funding the entire project so it will definitely be completed and then see what happens from there, you just have to follow your dreams and keep your fingers crossed.

Mike: As Nick said it’s a bit too early to be thinking about that however as the story has many facets that would be ripe for expansion it feels as though something like that could be possible in the future.

Curious? You can keep touch with the project at the London Gothic website and via the graphic novel’s social media channels.

An introduction to the dark London Gothic 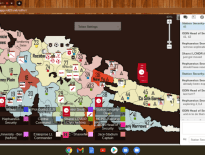 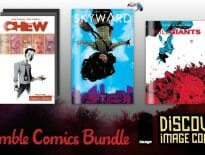