You are here: Home / TV / Anime / Rhythm game Deemo is becoming an anime

Deemo first appeared as a rhythm game for Android and iOS phones back in 2013. Since then it’s gone on to the PlayStation Vita, Nintendo Switch and even Steam with Deemo -Reborn-.

Now it’s getting a feature-length anime and a manga.

The anime was announced first, then the manga which will run in the Comic Zero Sum magazine.

Studios Signal.MD and Production I.G. are working on the film-length anime and had expected to wrap the project this year until lockdown delays.

A girl who fell from the skies and lost her past

an accidental encounter between the two.

The music flows as the fingers hit the piano keys.

The start of a fairytale journey has begun…

‘Before turning to leave, don’t forget to say one last 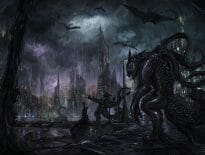