We know Ali Larter from Heroes. You might even know her from Resident Evil: Extinction 9. If you’re tapped into the news pulse you’ll also know she’s going to feature in Resident Evil: Afterlife.

In the States, Absolut Vodka are running a short film as an advert. It’s about the revenge rampage “Lemon Drop” goes on when her cute kittens are mysteriously taken from her. Directed by Traktor and the ad agency with the credits are none other than TBWA Chiat Day. 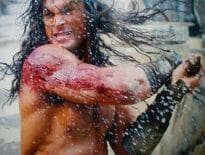