In this Irregular Reconnaissance, we mix and match some of Netflix and Crunchyroll’s latest shows with some classics.

As it turns out, there are shows are better through the nostalgic lens of memory than after a re-watch.

It’s an exciting time in anime-land. The strong rumours at Sony, who own Funimation, are considering a $1bn bid for Crunchyroll.

Meanwhile, Crunchyroll and Netflix are head-to-head with big announcements and investments in Original shows. It feels like the golden age of anime in the West.

In fact, we kick off this episode of Irregular Reconnaissance by looking at Netflix’s Blood of Zeus an anime made for the West about the West.

Here’s an American anime that I’ve not felt the urge to put subtitles on. I can’t explain it, perhaps I’m just used to listening with the volume down low and my eyes scanning the bottom of the screen, but all too often anime-like animations feel wrong without them.

Blood of Zeus is keeping my attention and, I think, solved the problem. It’s doing something right.

The idea here is that Blood of Zeus is a Greek myth that’s been lost to time. Zeus begets yet another son, and Hera understandably gets very upset. So far, the show is casting Zeus as doing his best while Hera’s bitterness is ruining everything. I feel plenty of sympathy for Hera, though.

Meanwhile, there are demons, and they’re serious business. Greek mythology demons explained in a way that suits the setting. Two thumbs up so far.

The Jujutsu Sorcerers use their own curses to fight rogue curses and save lives. I suspect there will be no shortage of superhero-mystic battles but, a few episodes in, and Jujutsu Kaisen is hinting at some darkness.

The characters we’ve met so far are interesting because they’re flawed. Even the headline hero has moments of utter weakness and terror in the face of overwhelming odds. It makes the inhuman feel human.

More than just fighting with occult vibes, Jujutsu Kaisen seems to be leaning towards more complicated morality and I suspect we’ll get flashes of just how horrible humans can be and why we spawn curses from all that negative energy in the first place.

So, yeah. Still watching. At this point, I’m pretty sure that the anime is mainly about friendship and kick-ass young women although it can’t resist a tight lycra shot from now and then.

I’m learning the lingo of bouldering/sports climbing with this show. To send a wall means to successfully climb it. We were dealing with a nasty blue sloper in the last episode.

So far, we’ve had competitions and outside climbing challenges to keep the focus on bouldering without it being repetitive. The only guy that’s featured is a silver fox and father.

The most part, though, we’ve got people being great friends through working hard and looking after one another. Happily watch some more.

What’s this? A 60-episode summary? I’ve been happily watching Black Clover in binge-bursts and if you’ve seen a few, liked them, but have fallen out of pace with the anime then I recommend you do the same. You can knock back plenty in the weekend.

As a reminder, we’ve a kingdom in which everyone has magic except our hero. His adopted brother seems to have loads of it, and they’re in not-always-friendly competition to be the best Wizard Knight in the land.

In the first arc, we’re up against a terrorist organisation that’s packed to the hilt with equally powerful mage users.

In the second, we’re dealing with discoveries made and the consequences of action and inaction in the first. It’s cleverly done. GMs should take note.

Yes, it has it’s zany moments, it’s not a Jujutsu Kaisen in tone, but that helps balance the show.

I had to re-watch Hellsing. It’s aged… fairly well.

The concept is that the British Hellsing organisation is wafer-thin but powerful, it has some staff including a talented butler called Walter, who doubles as an assassin but primarily exists to deploy the dreaded vampire Hellsing.

Hellsing has few saving graces, but I think we’re supposed to side with this tragedy.

The story is told through the lens of a cop who winds up in the middle of all this after Hellsing rescues her from a vampire outbreak.

That’s when the Nazi vampires hiding in South America make their move against London.

Hellsing deserves its 18-rating, isn’t for the faint-hearted, as a far too surreal ending and was a better series in my nostalgic memory than it was in my re-watch. It was pretty okay on the re-watch, though.

Have you done the same thing? Gone back to watch an old anime only to find it’s not quite as good as you remember? Let us know of any classics or any new shows you think readers should check out. 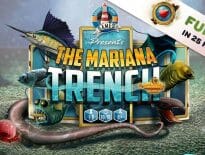 Tabletop & RPGs The Mariana Trench: A 1 or 2 player pocket board g…