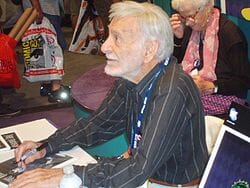 Bob Kane created Batman and hired the at-the-time 17 year old Jerry Robinson to ink the comics. Although it’s not without some controversy, it is now widely accepted that Jerry Robinson created the Joker character. Robinson was born in New Jersey, January the 1st, 1922 and died in his sleep on the 8th of December […]

"The same thing we do every night, Pinky - try to take over the world!"
Manage Cookie Consent
This site uses cookies 🍪, and links are ads that may earn bloggers some money 💰, and with this alert, I very much hope that these dark truths 🧌 are acknowledged.
Manage options Manage services Manage vendors Read more about these purposes
Preferences
{title} {title} {title}