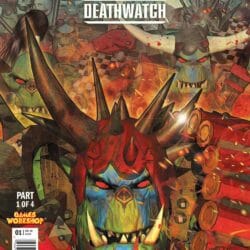 A new four-issue miniseries called Warhammer 40,000: Deathwatch is due out in January. We’ve three covers from the series to show here; cover A from Ørjan Svendsen, cover B from Fabio Listrani and cover C from Tazio Bettin. The series is based on the Games Workshop Deathwatch boardgame. There’s already been plenty of novels and, […]