You are here: Home / Games / Tabletop & RPGs / Riot Tabletop’s board game teaser races to half a million views

Riot Tabletop has a board game coming, and surely there can be no more doubt that the publisher, best known for computer games, has the potential to be a big player on the tabletop too.

Within hours of the Tellstones: King’s Gambit animated trailer going live it had racked up well over 400,000 views on YouTube.

League of Legends and Legends of Runeterra fans will recognise some of the characters. Featured are Demacian champions like Jarvin, Xin Zhao, Garen, Lux, Fiora, Taric, Quinn, and Valor, Cithria of Cloudfield and Laurent Chevalier.

With the trailer, Riot Tabletop also gave us a website to sign up to for more information about the game.

That site also talks about the player experience first Riot Tabletop is pursuing with this project; including accessibility, components of such quality to make owners pride and innovation when needed.

The box for the Tellstones: King’s Gambit was also revealed, and it speaks to that quality components promise given that it appears to be made out of metal. 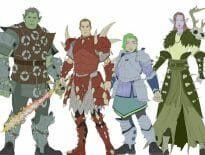