You are here: Home / Games / Tabletop & RPGs / A Great Game to Read: A Review of Exalted, Third Edition 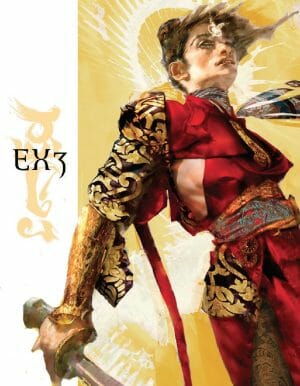 I don’t have any experience with Exalted’s previous editions, so I can’t really comment on what’s changed. All I know is this: by the time I finally finished reviewing all of Exalted: Third Edition (EX3)’s 650+ pages, I was stunned. Not just by the monumental size of this game, but it’s scope and execution. EX3 is one of the best role-playing corebooks I’ve ever read, and it’s an easy recommend for anyone interested in a quality role-playing game.

Exalted takes place in the world of Creation. Players take on the roles of the titular Exalted; essentially fantasy superheroes blessed by the gods, who once ruled the world but were exiled by a supernatural coup. Your players emerge into a world under a tight dogmatic regime, propagandized into painting the Exalted as heretical foes to be hunted down and slain. There’s a distinct martial arts epic influence that runs throughout EX3, but the world of Creation and its denizens pull from nearly every popular source of fantasy pop culture out there, from anime to console RPGs, Game of Thrones dark fantasy to wild wuxia films.

There’s politics and scheming aplenty, but the centerpiece of EX3 is martial arts action and legendary feats.  Players don’t make level one scrubs here; they start the game as mighty Exalted, capable of splitting trees with their fists, running straight up walls to uppercut demons in their stupid demon mouths, and roundhouse-kicking their way through entire armies of foes. Unlike most modern RPGs that hand-wave their way through the mechanics of such feats and try to keep the group focused on the story, EX3 has a robust, deep system that not only allows actions like these to mechanically work and make sense; the players are actually encouraged to be as melodramatic and over the top as possible.

One simple example of this is the stunt system. Fundamentally, it works like this: whenever a player turns a mundane use of an ability into a jaw-dropping spectacle, the character doesn’t get a penalty; he or she gets a bonus to the roll! There are varying degrees of stunts, and the only “balance” factor is the limits of the players’ imagination and the GM (or Storyteller, in this game)’s good judgement.

Another, more involved, example is EX3’s innovative combat system. Initiative is everything in EX3. Simple attacks (called “withering attacks” in EX3’s extensive yet necessary parlance) allow you to reduce your opponent’s’ initiative while increasing your own. When you think your initiative is high enough, you can launch a devastating “decisive” attack that adds your initiative to your attack’s damage. You get bonuses if you can bottom-out your opponent’s initiative; however, your opponent has opportunities to turn the tables on you, gaining initiative back while costing you your own. This system turns even the most straight-forward of fights into an exciting game of risk-versus-reward. Combined with the stunt mechanics I previously mentioned, EX3’s combat becomes not only mechanically-rich, but narratively-rich, as well.

The engine powering all of this is the venerable Storyteller system, of Vampire: The Masquerade fame. However, there are so many tweaks to the system to accommodate the god-like Exalted that the system bears more of a resemblance to White Wolf’s Trinity Continuum (Adventure!, Aeon, and Aberrant) than to its more recent Chronicles of Darkness games. On paper at least, the system seems much smoother than the Continuum games, but still at a “medium” crunch level, weighing in around, say, a Mutants & Masterminds level, or maybe even a Warhammer Fantasy Roleplay. The rules repeat often and vigorously the importance of Storyteller fiat in EX3, and more than many games, the whole “if you’re not comfortable with it, don’t use it until you are” principle applies.

All of this adds up to a decent role-playing game. What elevates EX3 to something greater is its writing. On every level…technical, creative, instructional…EX3’s writing is absolutely top-notch and can easily be defined as the high-water mark for the entire hobby today. EX3 is a stark contrast to the scrappy independent efforts that have dominated the scene in past years; its 600+ pages, gorgeous artwork, and lavishly-detailed setting fly in the face of its digest-sized, do-it-yourself contemporaries. EX3 is not a game where you rush through the setting chapter to get to the rules. The writing about the culture, climate, and history of Creation is on a quality level on par with the finest fantasy novels out today. Even if you never get EX3 to the table, this is the kind of game you’ll proudly display on your bookshelf. It’s the book you’ll show your non-RPG friends to try and hook them into the hobby.

Unfortunately, all of this quality comes with a hefty pricetag. The cheapest option (not counting any free quickstart options) is the pdf alone, at $30. On the other end, the hardcover premium quality print edition will set you back over $100. And that’s not counting all the backwards-compatible setting sourcebooks from the game’s prior editions, as well as whatever’s coming down the pipe for EX3 in the future (though, with 650+ pages stuffed with content, it could be a very long time before you’d ever need more material; you’d likely buy it for the love of the setting before you ever actually ran out of adventures, inspiration, and setting material). EX3 is totally, absolutely worth every cent you spend, but the bottom line is, many gamers just don’t have that kind of money to spend on a game. And that’s a shame, because everybody should give EX3 a serious look. With its many interlocking systems and exhaustive detail, Exalted: Third Edition may not be for everybody, but it is definitely a game worth reading.

A Great Game to Read: A Review of Exalted, Third Edition 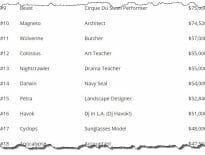 Geek Stuff How much would the X-Men earn in their day jobs? [… 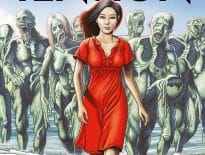