Traveller’s Guide to Elusis is a 92-page campaign setting that’s been lovingly detailed on Homebrewery, using D&D 5e rules, and made available for free.

The world is the work of Jordan Smee, a student in South Essex, who is studying computer games.

Elusis has always been a land of a discovery, even the first races on this world found traces of earlier influences. Progenitor beings that carved the earth and channeled the seas, who through their immense power gave rise to the natural order and in doing allowed for the new races to rise.

Elusis’ creation story is that of a dreaming entity that conjured up two progenitors who then, in turn, made more. In due time, as the descendants became gods and then people, turmoil broke out until the Divine Truce.

It’s history that brings Elusis to life, a lengthy introduction that takes you through tens of thousands of years of history from the events of the Titansgreave to present day.

There are three prominent pantheons in Elusis, the Prime Deities that protect the natural order and the Forgotten Gods who fight alongside Blood Mages. The Old Gods still exist, though, or some of them, such as The Nightmother, The Autumnal Guardian and The Brightsister.

As you’d expect for a world as cosmopolitan as Elusis, there are many factions and societies with prominent NPCs and goals of their own. A dozen are detailed fully before even leaving chapter one.

Chapter two includes a gazetter, calendar, notes on the passing of time and then a look at the Elican Region, Wresthaven, The Continent of En’Din, The Greater Region of Tala’Doir and the Wild Lands. Maps of the world can be found at the end.

Is any homebrew D&D 5e complete without new subclasses? The World of Elusis has plenty.

Way of the Vermilion Cabal is introduced for Monks, the White Rose Knight for Fighters along with another knightly order known as Crimson Dragon.

Also for Monks is the subclass the Way of the Lotus Winds and for arcane magic, there’s The Astral Dragon for Warlocks and the School of the Eternal Wizards.

Backgrounds added by the supplement are Assassrian, STudent of the Arcanum Mortis, Coteri Member and Merien Member.

However, there’s more than just subclasses when it comes to new magic. Harking back to the battles of history and the involvement of gods, Elusis has new schools of magic.

There’s a DMs Guild logo on the cover page for the Traveller’s Guide to Elusis but no such product in the store. Perhaps there’s a paid-for version planned for the future?

You can check out Elusis over at Homebrewery. 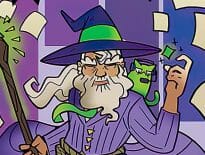 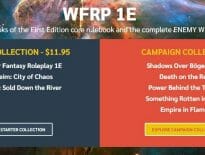