Fantasy Flight Games announced The Dogwich Legacy as an expansion for their game Barkham Horror: The Card Game.

Except, they didn’t. The whole thing was an April Fool’s joke and a play on the popular Arkham Horror card and board games.

Well, sometimes, ideas have power. Sometimes, concepts can take on a life of their own. Each whisper or murmur lends itself to making the unreal, real.

The magic happened, and now Fantasy Flight Games have announced that Barkham Horror: The Meddling of Meowlathotep will be made. It’s real.

You can pre-order at Fantasy Flight Games but please note you will still need a copy of Arkham Horror: The Card Game 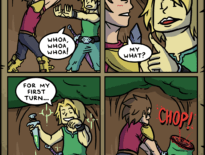 Geek Stuff Do you prefer turn-based combat or realtime? 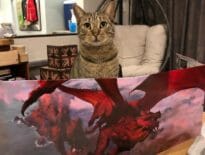 Geek Stuff 15 times cats were caught playing D&D
💰 Copper Coins 💰 Geek Native is an affiliate and may earn commission on purchases you make from third-party sites.
🍪 Privacy & Cookies 🍪 The site uses cookies to survive. By accessing the site, you agree to use your browser to control cookie use or take 1d4-3 privacy damage (tracking). If you defeat cookies via ad blocking, please consider the Patreon. An intro to cookies, and how to control them, can be found here. I Manage Cookies